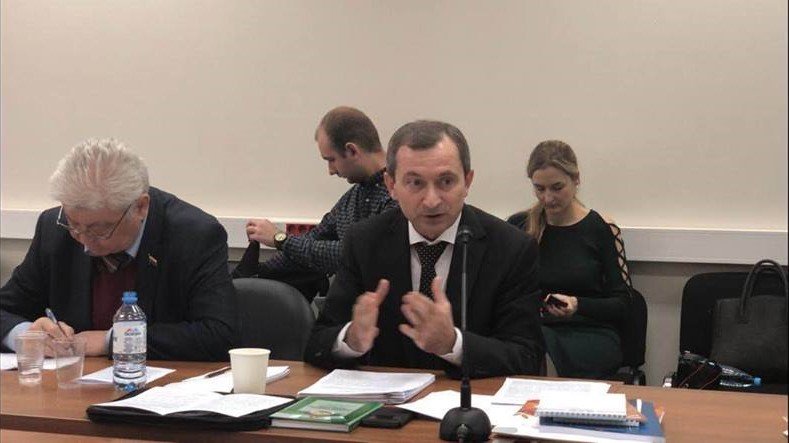 Chairman of the Constitutional Court of Ingushetia Ayup Gagiyev refused to run for the State Duma after the election commission filed documents to court to annul his registration as a candidate. The claims of the Election Commission against Ayup Gagiyev are just a formality, this way independent candidates are barred from participating in elections, experts believe.

Chairman of the Constitutional Court of Ingushetia Ayup Gagiyev announced about his refusal to participate in the August 18 elections on his Facebook page.

He said that documents had been filed with the court to annul his registration as a candidate for the State Duma. “The reason is trivial: he did not indicate the land plot, which is in gratuitous use, as belonging to the right of ownership,” Gagiev wrote.

The chairman of the Constitutional Court of Ingushetia said that he had no illusions about the possible outcome of such a trial. “When I ran for deputy, I believed that my professional knowledge and experience would be necessary to work in the parliament of the country, as I have been engaged in lawmaking and law enforcement activities for more than 25 years. But as we can see, candidates with other qualities are in demand today,” he said.

“In the current situation, after consulting with friends and like-minded people, I have decided not to participate in this “election”. I am sincerely grateful to everyone who supports me in word and deed,” said Gagiev.

His post garnered more than 100 comments in three days. Many users expressed regret and wrote that they decided to go to the polls for the first time in years only to vote for Gagiev.

Commentators also urged Gagiyev not to withdraw his candidacy and fight in the courts for his right to participate in the elections.

“Do not refuse under any circumstances!… Let’s go all the way! … Let’s sue the CEC and unite our efforts to discover the untidiness … in the commissions!” – Baghaudin Myakiyev, an activist who had served his sentence in the rally case, wrote.

According to Ingush politicians and public figures, the authorities are in every way trying to prevent an independent candidate from taking part in the election, and the disputed precinct is merely a formal reason for cancelling his registration.

Ruslan Mutsolgov, human rights activist and chairman of the Ingush regional branch of the “Yabloko” party from which Ayup Gagiyev was nominated, believes that the court action is a kind of signal to the system that this candidate is extremely undesirable for it.

“He (Gagiev) has repeatedly demonstrated his position before and the people have supported him. Therefore, the YABLOKO party has given a chance not only for him to be elected, but also for the people of the republic to get a really popularly elected person in the State Duma, who will stand up for our rights and interests. For my part, I respect Ayup and his decision, so I can only agree with him,” he said.

The human rights defender does not consider the land plot not indicated in the documents as a valid reason for cancelling the registration of a candidate for deputy.

“Based on our judicial practice, the outcome of any case where the participants on one side are the authorities, and on the other – its opponents, is already predetermined. I am sure that Ayup Gagiyev’s decision is weighted, and it was not made on emotion,” he said.

Anzhela Matiyeva, an expert political scientist, shares the same opinion. “The information that Ayup was taking back his documents was very upsetting to the Ingush public, especially to young people. But I suppose there are things that have been left out of the picture. I can assume that the pressure on Ayup to recuse himself was much stronger than we can know and see. Submitting to the court is the first public action, and further on, as the election approaches, this pressure would only increase,” she said.

Matieva believes Ayup Gagiyev’s decision not to run in the election is “weighted in all aspects”. “I have no doubts that Ayup made his decision in a balanced way, based on the reality in which he is, and understanding of the prospects he may face… Knowing what a courageous, knowledgeable man Ayup is, one cannot accuse him of being afraid of someone, he is not that kind of person. And he took that decision very hard”, he said.

The deputy’s chair is not the only opportunity to influence the situation in the republic, she believes. “We have opportunities that we do not use – it’s public control, which with the existing laws and mechanisms in the Russian Federation can do a lot.- People who could not overcome the obstacles that were put up to them and get into the local parliament or the Duma, can do a lot, resuscitating the public control. Although, of course, with a parliamentary mandate there are more opportunities,” Matiyeva said.

Lawyer Magomed Bekov also thinks that the polling station is just a formal reason for cancelling the registration of unwanted candidates. “According to Article 99 of Law No. 20 on Elections to the State Duma of the Federal Assembly of the Russian Federation, the grounds for annulment are ‘provision of false information,'” he explained.

“This plot is in perpetual use, but is not property. In accordance with the law, the right of ownership must be registered. In FZ-20 (“On Elections of Deputies of the State Duma of the Federal Assembly of the Russian Federation”)*, nowhere does it say that it is necessary to provide information on all property, all land plots. Why, if it is found out that there is such a plot, should the registration be cancelled? Why not demand documents for this plot? In contrast, the law does not restrict the CEC from requesting this additional information if they become aware that they have a land plot in use. Failure to provide any information is not misrepresentation. There is a “fork” in the law, there is no specificity, and lack of specificity always generates disputes, different interpretations of this or that norm,” said Bekov.

The lawyer believes that the law enforcement practice of deregistration “has followed a vicious path”. “The registration is always cancelled for undesirable candidates on some formal grounds,” he said.

At the same time Bekov believes that in this situation Ayup Gagiyev should fight for his right in courts. “There is no need to withdraw one’s candidacy. We should be principled after all and even go as far as the European Court of Human Rights,” he believes.

But Bekov said that as a lawyer he understood the logic behind Gagiyev’s decision to withdraw his candidacy. “Perhaps he felt there was no point in getting involved in this farce. As the chairman of the Constitutional Court he is well aware that it will probably end up more political than objective decision, given that there is a practice that goes the way of the law that is not related to the law”.

We should remind you that on August 6th Ayup Gagiyev announced that he was officially registered as a candidate for the State Duma of the eighth convocation. He was nominated by the political party Yabloko in Ingush single-mandate electoral district No. 13.

Everything should be done within the law to free the leaders of the Ingush protest, said Ayup Gagiyev, chairman of the Constitutional Court of Ingushetia, in a speech to the republic’s elders. He also spoke about harmony and peace among the people.

According to Article 43 (1) of Federal Law No. 20 On Elections to the State Duma of the Federal Assembly of the Russian Federation, “a candidate nominated by a political party in a single-mandate electoral district and included in the list of candidates in single-mandate electoral districts certified by the Central Electoral Commission of the Russian Federation … shall provide to the respective district electoral commission information … concerning the property owned by the candidate.

The metamorphosis of Issa Kostoyev’s views before the elections. Editor-in-chief’s column