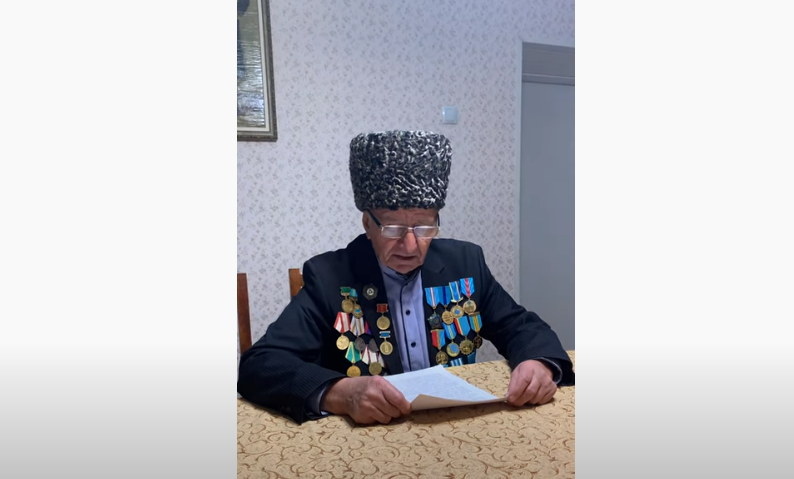 Salman Geroyev, an 83-year-old resident of Akhki-Yurt, Prigorodny district, Chechen-Ingush ASSR, and a public figure from Kazakhstan, recorded a video message to Russian President Vladimir Putin in connection with the sentencing of political prisoners in Ingushetia.

“Vladimir Vladimirovich, this verdict is not just for these deeply respected people, but for the entire Ingush people. The creation of an extremist organization and the opposition to law enforcement agencies […] is a blatant lie. This is yet another genocide against the Ingush people,” he said.

Heroyev recalled that the Ingush people have been persecuted many times, and their rights have been violated by the authorities of the USSR and the Russian Federation. We’re talking about the deportation of the Ingush people in February 1944, the Ossetian-Ingush conflict in the fall of 1992, and the failure to implement the law “on the rehabilitation of the repressed peoples,” he said.

“The law ‘on the rehabilitation of the repressed peoples’ passed in 1991 gave us hope of restoring the Ingush to their ancestral lands in the Prigorodny district […] Instead, the Russian authorities gave in, propaganda, slander, against history, against the Ingush people,” he said.

We would remind you that October 31 marks a sorrowful date – the beginning of the Ossetian-Ingush ethno-political armed conflict in 1992. It lasted for a week in the Prigorodny district of North Ossetia and part of Vladikavkaz. As a result of pogroms, destruction and killings, 490 Ingush and 118 Ossetians were killed, according to official figures. In Ingushetia, the majority of the population considers the conflict to be essentially genocide. In 1994 the parliament of the republic decided that there was a forced deportation of the Ingush population from North Ossetia and ethnic cleansing of the Prigorodny district and Vladikavkaz.

The deputy chairman of the Assembly of the People of Kazakhstan believes that the reason for mass protests in Ingushetia was the alienation of Ingush lands, high unemployment, poverty, and corrupt government.

“In such a situation, the people, without any organization, feeling that their honor and dignity were infringed, voluntarily came out to an officially permitted rally to have their opinion heard, including you, Vladimir Vladimirovich! In the hope that you would help to defend justice, the truth,” the elder said.

The verdict in the so-called “Ingush case” was in fact passed on the entire Ingush people, he added. Heroes urged the Russian president to release the innocent people.

“Release the innocent people. […] rectify this blatant lawlessness and injustice. […] pay attention to the fate of the Ingush people […] Establish a commission to study the situation of this people. Cancel the sentence in the Ingush case, because it concerns all the representatives of my people, no matter what part of the world they are in,” Heroyev concluded. He also noted that . “incomprehensible in the current situation, the silence of the head of Ingushetia, the government, deputies and others who are responsible for protecting the people and the territorial integrity of the republic.”

Recall that mass protests have been taking place in Ingushetia since the fall of 2018. The inhabitants of the republic opposed the agreement on the border with Chechnya. In March 2019, the rallies turned into clashes with security forces and detentions of activists. Most of those arrested in the aftermath of those events received real sentences on charges of violence against public officials.

Lawyers and activists made their predictions about the “Ingush case