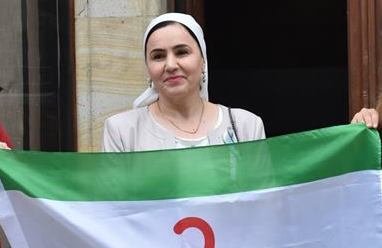 Angela Matieva, a participant in protests against the border agreement between Ingushetia and Chechnya, was laid off along with her entire social department of four employees, she herself said on her Facebook page.

“They visited me on Thursday […] They brought a notice that my entire social department (four people) at Ingushneft is being cut along with me, despite the fact that I am the chairman of the Ingushneft trade union. They liquidated almost all social programs”, – she wrote.

According to Matieva, in addition to the social department, which she headed, more than 30 employees of the oil company were affected by the cuts. She speculated that Tsentrgeko Holding LLC bought the entire 51% stake in Ingushneft from Rosneft, she suggested.

“Dust in the eyes, so that they were accepted with kindness. It is unclear whether they bought all the shares or not, the name remains the same as RN Ingushneft, apparently not all the money has been paid. I assume that the controlling stake may be in the hands of the Ingush government,” said the activist.

Matieva believes that the management company, despite vowing promises to the head of Ingushetia M-A. Kalimatov not to cut people at the company, sent employees home. The chairman of the Ingushneft trade union intends to seek justice.

“I will deal with each of the laid-off union members, we will go to court if we have to. I haven’t received the union’s paperwork about the layoffs yet. We sent them by mail on purpose. I have something to say and [the company management],” she said.

Angela Matieva believes that she was cut for political reasons. In 2018, a woman was fired from her company for participating in a protest against the border agreement with Chechnya. In the summer of 2020, the activist was reinstated by decision of the Malgobek City Court, “Kavkazsky Uzel “* reported earlier.

“It’s been almost a year and a half since I’ve been reinstated and I think the reduction in my entire department is aimed at taking me out, although there is every reason to demand that at least two units be kept,” she concluded.

Fortanga previously reported that Angela Matieva was fired from Ingushneft in December 2018 for skipping corporate training courses. However, she felt that such a decision followed in connection with her participation in protests in Magas in November 2018 against the transfer of Ingushetian territory to Chechnya’s control.

On June 7, 2019, she was found guilty under administrative Article 20.2 “Violation of the established procedure for organizing or holding a meeting, rally, demonstration, march or picketing”, the court imposed a fine of 10 thousand rubles.

There were also attempts to bring her under another article of the Code of Administrative Offences of the Russian Federation – on disobedience to legal demands of law enforcement officers, but the court acquitted Matieva.

In October 2019, Matieva’s defense filed an appeal to the Russian Supreme Court, which in April 2020 ruled to overturn earlier rulings and send the case for a new trial. This time the Malgobek court listened to the arguments of the plaintiff.

* The Russian Ministry of Justice included the publication in the register of mass media performing the functions of a foreign agent.