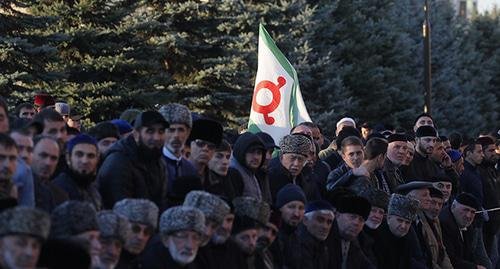 On March 26 it was exactly two years since the protest in Ingushetia, which was followed by mass repression of the republic’s residents. After the rallies in Magas 48 criminal cases were initiated under the article on violence against the representatives of authorities, about 30 people received real sentences. Still in pre-trial detention facilities there are protest leaders who have tried to assert the rights of their people peacefully. Lawyers and human rights activists shared their views with Fortanga on the current socio-political situation in Ingushetia.

“After the change of the head, there were no positive changes in the socio-political life of the republic. There has been no dialogue between the people and the authorities, the new head is outwardly trustworthy and gives the impression of being an educated, decent man. But in Ingushetia these qualities are not sufficient to be an effective manager and leader of the people. When Mahmud-Ali Kalimatov was taking office, he uttered the following words: “I need the support not only of the people who are in this hall, but the support of all citizens of the republic…”. However, I have not seen any dramatic changes since his appointment. There is an explanation for this as the previous head Yunus-Bek Evkurov in his 10 years in power totally destroyed the republic’s economy, education and medicine. Yes, facilities were built, red ribbons were cut, but all this was for show, as was reported by adviser to the new leader, Isa Kostoyev, who told in a video that the republic was on the brink of a collapse, and facilities built under former leader Evkurov were unprofitable. The sad thing is that the personnel policy in the republic has not changed, everything is at the level of tribal relations.

I assess the situation in the republic as steadily difficult, although I do not live there. These are my personal observations from conversations with relatives, friends, community members, as well as observations on social media. For two years the situation in the republic has not improved, a chasm has formed between the people and the authorities, there is no linking thread, no real steps are seen to establish a dialogue with the people and return the trust of citizens to the authorities.

The Ingush case is unprecedented in our country, and the structure of the charges brought against our protest leaders has no parallel in Russia. I am sure that this case is a way of breaking Ingushetia’s civil society and raising the obedience of all those who disagree with the arbitrary rule of the authorities. Recent events with the return to custody of Zarifa Sautieva show that the principle of humanism and objectivity of the court of first instance will be violently suppressed by servants of justice of higher courts, we were told about it, but this is not a reason to despair, we will fight for our prisoners and hope that in this vicious system there is a man in the robe or in shoulder straps who has not sold his conscience for ranks, awards and a warm place under the sun.

“It’s been two years since the rally in Magas. Some of the most effective representatives of civil society have been victims of repression and have been unjustly and unreasonably detained for two years. If we talk about the socio-political situation, nothing has changed by and large. First, people are worried about the anti-people agreement and repression. Secondly, the republic has been declared bankrupt – this is the first case in the Russian Federation. We also do not see any systemic changes and a competent personnel policy. And so it will go on until the people are able to choose their own head.

The authorities in the republic, though renewed, continue to live apart from their people. This was especially evident at the height of the pandemic, when ordinary people took the brunt of the blow, and it was the people, not the government, who helped then. And everything was and still is based on civic initiative. Unfortunately, we are far from economic or political prosperity; moreover, all that was previously lost is also lost, and now we are standing still, losing our most valuable asset – time.

Everything about the rally case is one of the biggest repressions in modern Russia. And, it must be said, March 2019 wasn’t just a rally, it was a dignity protest. For 14 days in a row, there was not a single act of vandalism, there were no riots, and the people behaved with culture and dignity. And now there is no basis for blaming the citizens, as the population had one goal – to make them respect their rights and the Constitution. I am inclined to believe that this repression is a trivial grudge or revenge against generals who can influence economic and political opinion in the country. Undoubtedly, all those who have fallen under these repressions are both victims and heroes in the eyes of the entire republic.”

“Two years after the rallies in Ingushetia, people who tried to restore justice through peaceful protest are still being detained. And this, of course, is of great concern to us – human rights defenders, lawyers and the public in general.

The protest of these people cannot be regarded as an anti-social action, much less as an administrative or criminal offence. The authorities have no right to accuse them because they were exercising their rights, peacefully and without aggression. Our defendants, two years after those events, are in custody without any evidence of their guilt. And we have repeatedly raised the issue of their release.

After Zarifa Sautieva was returned to the detention center, we expressed our indignation by sending a telegram to the Chairman of the Supreme Court of the Russian Federation. We complained about the violations committed against all the defendants and violations of Russian law in general. Because, before the statutory three-day period expired, the case was withdrawn from the trial court and taken to the appellate court. And the Stavropol Territorial Court issued a decision on 16 March, when the statutory deadline had not yet expired. That’s not how justice works! This is a disgrace and a demonstration of the lack of independence of the entire Russian justice system”.