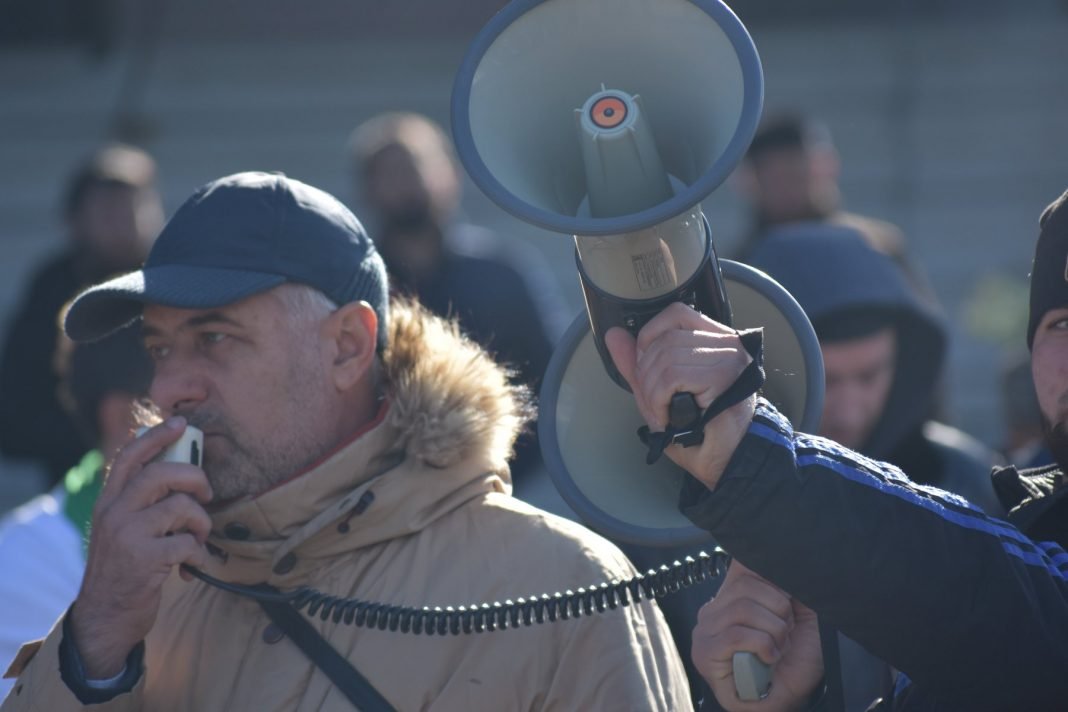 “Concepts and judgments are meaningful only insofar as they can be unambiguously matched by observable facts.”
А. Einstein

Judge of the Yessentuki City Court Pogosyan K.A. recognized Khamhoeva M.M. guilty of committing an offence under Art. 33; ч. 1 Art. 318 of the Criminal Code (incitement to commit violence against a public official, not dangerous to life or health) and sentenced him to 3 years and 6 months imprisonment in a minimum security penal colony.

Even a cursory analysis of this dubious, from the point of view of the criminal procedure law, judicial act issued in the name of the Russian Federation, reveals a chain of contradictions between the facts and inconsistency of the court’s conclusions, set out in the motivation and resultative part of the sentence, to the actual circumstances of what happened on 26-27 March 2019. One does not need to be Plevenko or A. Koni to understand that the sentence issued by Judge Pogosyan K.A. against Khamhoev M.M. is illegal, groundless and unmotivated.

Judicial acts made earlier in relation to B.A. Chemurziev and M.A. Malsagov on extension of detention by judge K.A. Pogosyan were cancelled by the appeal instance of the Stavropol regional court for the reason that in judicial acts there were found a lot of significant violations. Judge Pogosyan K.A. distinguished himself by extremely low professional competence before, but in the verdict to Khamkhoyev M.M. he managed to surpass himself. Of course, I am not much of a criminal justice expert, but even in my opinion, Poghosyan has committed a number of significant violations of the norms of the RF Criminal Procedural Code and the RF Criminal Code.

Let’s start with the simplest, formal violations. While writing the text of the verdict for Khamkhoyev M. the judge stayed true to his “principles”: he simply took the text prepared by the investigators of the Investigative Committee of the North Caucasus Federal District in the indictment, and simply put it in the text of the judicial act. And he does it with all the spelling, punctuation and stylistic mistakes, which has already repeatedly played a cruel joke on him. In particular, the judge Pogosyan K.A. indicates in the text of the sentence that the court found: Khamkhoyev M.M. instigated a group of people to commit violence against the Rosgvardia, being under the influence and direction of Chemurziev B.A., Barakhoyev A.O., Uzhakhov M.M., Malsagov M.A., Pogorov A.S., Khautiev B.A., Naldiyev I.M. and Sautieva Z.M.

However, the trial of the Ingush public activists is still in progress, and preliminary investigation has not yet been completed in relation to A. S. Pogorov. And it is quite possible that the Kislovodsk city court could acquit them or reclassify their actions under another article of the Criminal Code of the Russian Federation. Theoretically and legally it is quite possible. But judge Poghosyan K.A. confidently includes them in the text of his sentence, although they were not interrogated during the court hearings, their role in the crime has not been established by any court verdict on the territory of the country and beyond its borders yet. In fact, K.A. Poghosyan partially established the extent of their guilt, although their case was not the subject of court proceedings in Yessentuki City Court.

Further, the judge found in the verdict that the defendant incited to commit a crime a number of persons, in respect of whom there are sentences entered into force of the Zheleznovodsk city court. Meanwhile, the list of these persons includes Muzhakhoyev I. and Azhigov A., who not only have not been convicted, but the investigation has completely abandoned their prosecution due to their alibi. Nevertheless, Judge Poghosyan K.A. includes them in the text of the verdict. In addition, the court indicates in the list of persons several more people, whose sentences have either entered into force after the preliminary investigation of Khamkhoyev M.M. has been completed, or the sentence has not yet been passed.

The court did not prove that in the actions of Khamkhoyev M.M. there is a corpus delicti under part 1 of Art. 33; Art. 318 part 1 of the Criminal Code: neither the objective side nor the subjective one. None of the victims pointed to the defendant as the person who instigated or otherwise committed the crime against them. The executors, the persons who confessed to the crime, do not point to Khamkhoyev M.M. as a person who incited the commission of violence. On the contrary, during their interrogation as witnesses they confirmed that they had acted independently, and most also informed the court that they had first seen the defendant only in the pre-detention centre of Pyatigorsk or in the pre-detention centre of Nalchik and had not even suspected of his existence.

There is only one “evidence” upon which the court based its conviction – the testimony of a classified witness. All evidence of Khamkhoyev M.M.’s innocence. – testimonies of more than 20 witnesses, testimonies of victims, video materials – all were rejected by the court, finding them not credible. Trusted only one classified witness. As paradoxical as it may sound, the main problem with the prosecution is that everything that happened on 26-27 March 2019 in the NTRC Ingushetia car park is recorded by objective data. Everyone was filming: police officers, Federal Security Service officers, Rosgvardia officers, and the protesters themselves.

There are terabytes of video material, so it is not very difficult to confirm or disprove any testimony of the accused, witnesses or the victim. But the court must convict the innocent, and therefore objective evidence, video and photo materials only hinder the trial, as they contradict the testimony of classified witnesses. But that didn’t embarrass the court.

Judge Poghosyan K.A. was not confused. and the fact that the “sextot” does not confirm in his testimony that Khamkhoyev M.M. called for the use of violence against representatives of the authorities. He reveals that the defendant urged to stand to the end, not to leave the square. But not leaving and calling for violence, including throwing stones, chairs, and hitting are still different things that have no causal connection to each other.

In legal terms, the evidence on which the conviction is based does not meet the requirements set out in Art. 88 of the CCrimP of the RF: they do not have the criteria of relevance, admissibility, reliability and most importantly – there is no sufficiency of the totality of evidence. The testimony of the classified witness is not corroborated by other objective data and contradicts other evidence collected in the case. The guilt of the defendant must be confirmed by the totality of the evidence examined by the court. And that’s not even in the criminal case file. A flawed approach to evaluating evidence results in the wrongful conviction of an innocent person. And the testimony of a classified witness cannot be the basis for the verdict, as the witness could not specify the source of his knowledge, and this is a reason to recognize his testimony as inadmissible evidence, based on the requirements of part 2 of Art. 75 OF THE RF CCRP.

In passing sentence and sentencing the court violated not only the principles of sentencing provided for by the general part of the Criminal Code of the Russian Federation, but also demonstrated a complete lack of legal logic in establishing the cause-and-effect relations. Each person who has taken part in committing a crime shall be responsible only for his act to the extent of his guilt under the corresponding article of the Special Part of the Criminal Code of the Russian Federation. On the basis of which norms of law and judicial practice Judge Poghosyan K.A. imposed a sentence of 3 years and 6 months imprisonment on the “instigator”, while the most severe sentence imposed on the direct perpetrators of the crime by the Zheleznovodsk City Court was 1 year and 11 months?

What were the guiding principles of judge Pogosyan K.A. while sentencing Khamkhoyev M. to 3 years and 6 months, if the defendant was prosecuted for the first time, has five minor children and other mitigating circumstances, if according to the court practice, established in the RF, for persons with similar circumstances, the punishment not exceeding 2/3 of the maximum sentence provided by part 1 article 318 of the Criminal Code, and it is not more than 3 years and 4 months?

Based on the above, we can confidently state the fact that the court has not established any of the circumstances listed in Article 73 of the RF CCrP and subject to proof: time, place, method, guilt, intent, motive, etc.

At one time the Supreme Court of the Russian Federation changed the jurisdiction of criminal cases against residents of Ingushetia on the grounds that judges in Ingushetia are not distinguished by objectivity and impartiality.

If we believe that the verdict made by Judge Poghosyan is distinguished by objectivity and impartiality, then it is not clear at all what justice is in Russia, and whether it exists at all? For me the verdict of the Essentuki court in general is the apogee, quintessence of legal mayhem, taking place in the law enforcement and judicial system of the North Caucasus Federal District in respect of ordinary people in the mountainous republics.

Conviction in relation to Khamkhoyev M.M. itself discredits the judiciary and calls into question the fundamental principle of judicial independence enshrined in the Constitution of the Russian Federation. There is no doubt that the court, in passing sentence, was guided not by the law of criminal procedure, but by the time the defendant spent in pre-trial detention and the September general elections. The sentences handed down against the residents of Ingushetia by the courts in Zheleznovodsk, Essentuki and, in future, Kislovodsk, are in fact not sentences against Russian citizens, but against the country’s judicial system itself, recording the latest stage of its gradual degradation.

“Not a trial, but a trial”: border dispute turned into years of persecution for Ingush...