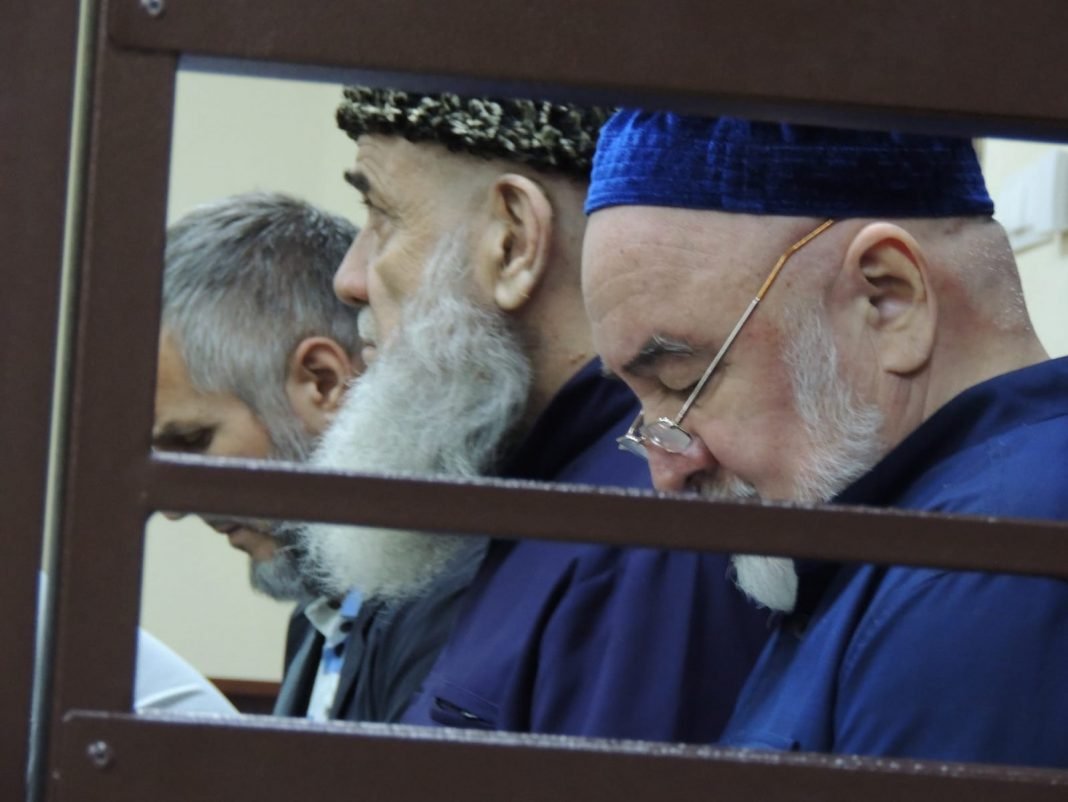 On August 25, 11 defense witnesses testified in favor of the defendants at the session of the Kislovodsk City Court on the rally case. The court has attached video recordings in which the head of Ingushetia demands that protesters in Magas be punished, lawyers said.

Today, a defence motion was granted to attach to the criminal case of seven protest leaders a video recording in which one of the rally participants, first-group disabled Adam Dudarkiev, tried to prevent the crowd from clashing with the Russian guards, lawyer Bilan Dzugaev told Fortanga.

According to the lawyer, in this video Dudarkiev is sitting in a wheelchair between the rows of protesters and security forces. He tells the protesters to step back three steps and to the Russian Guard: “We don’t want to fight. Don’t push us out. We are keeping order,” Dzugayev said.

The lawyer said that Adam Dudarkiev also appeared in court today as a defence witness and explained that he had indeed addressed the participants in the clash with similar words, trying to prevent a scuffle. “Such testimonies are very important for the defense, because they show that people didn’t want to resist, didn’t want to clash with representatives of the authorities. They started to be squeezed into a ring from different sides, forced out and provoked. I asked him a question: “Are you, too, the leader of the protest? You ask, you order”. He replied: “Yes, I consider myself a leader too. Just like everyone else,” Dzugaev explained.

“Our defendants are charged that they organized this rally and literally commanded people like warlords: ‘Pull back, stand, fight, attack. As evidence for this, they provide recordings where our defendants say, “Stand in line” or, “Don’t go, stay here.” And we say, “Look, every other person there was screaming.” And we provide such video materials as evidence,” Dzugaev explained the defense strategy.

Nine of the witnesses questioned today were not eyewitnesses to the events on the morning of March 27 in Magas, but as participants in the rallies against changes in Ingushetia’s borders they expressed a desire to come to court to express their position on the case and share their impressions about the Ingush protests and the rally, lawyer Magomed Bekov told Fortanga.

“All eleven witnesses as one said that this was an absurd case, that our defendants should not be in custody, in a cage. They said that if the defendants were extremists, then the whole Ingush people should be tried, at least the 90,000 people who came out to the rally. Because they are all leaders, too. This was said by almost every witness who was questioned,” said the lawyer.

According to Bekov, all witnesses questioned today confirmed that the defendants had not called anyone to any illegal actions and had not manipulated people’s consciousness, and that each of them came to the square out of their hearts desire – no one had influenced their decision to come to the rally.

The hearing also granted the defence motion to attach the video evidence that people who were present in the square at the time of the riots, did not want a conflict with the law enforcement and tried to prevent a clash.

Bekov also said that today he was satisfied with a petition for the attachment of answers to the defense requests from the National TV and Radio Company “Ingushetia”. This motion was made by the defense at the court hearing on August 24. The NTRC “Ingushetia” provided as a response disks with video footage in which Yunus-Bek Evkurov at a meeting instructs the secretary of the Security Council, Akhmet Dzeitov, to bring all the organizers of the rally to criminal liability and detain them in custody. The lawyer said that this story had been shown earlier on Ingush television. According to Bekov, the state prosecution objected to the admission of this defence evidence.

“This material shows that Yunus-Bek Yevkurov was interested in accusing our defendants, as he gives a direct order to arrest and prosecute them. They are accused of having political animosity towards Yevkurov, and this video shows that in fact Yevkurov had animosity towards these people. Moreover … the head of a constituent member of the Russian Federation has no right to give such orders, as he is not the chief of criminal investigations or the head of any legal or law enforcement structures, or a prosecutor. Even persons with that kind of authority never give such direct instructions that “criminal cases should be opened” or that people should be put in prison. They’re instructing us to conduct a background check. Such direct instructions are a clear abuse of power,” believes Magomed Bekov.

The meeting lasted five and a half hours, with a lunch break. The next meeting is scheduled for August 31.