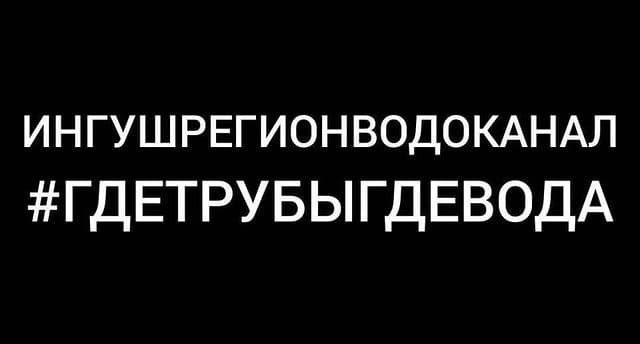 The publication of a video frame showing the head of the “Vodokanal” of the Malgobeksky district, Arsmak Merzhoyev, dancing at a polling station, caused an aggressive reaction from the official’s entourage. Social network users launched a flashmob “IngushregionVodokanal #gdetrubygdevoda” on the Internet.

Blogger Adam Khamchiev reported that he published on his Instagram page a screenshot of a frame of a video posted in the public domain on the official account of the agency, and accompanied it with the caption: “Where are the pipes? Where’s the water? Where’s the money?”.

According to Khamchiyev, Merzhoyev’s relatives demanded to delete the post. The blogger said that he summoned the head of Malgobek Vodokanal to the Sharia court for proceedings. He explained that he wanted to present the issues identified in the post in person to the official. The suit received a response from Merzhoyev’s sons: they promised to come and deal with the boy “otherwise.

“They said they would come to the Sharia court. I offered them to choose any theologian. They said that theologians are not needed, and asked to come to the proceedings without them,” the blogger said.

According to him, the question was addressed specifically to the Ingush Vodokanal and not to the Teyp. “From now on we will talk to you in your language. We are experiencing problems with drinking water while you are collecting money from our pensioners for an unprovided resource […] I will talk to you in the legal field. I want to address the residents and tell them that this is not an interstate issue. Don’t get into personalities. Here the claims are addressed to the official”, – concluded Khamchiev.

In support of the blogger, concerned individuals launched a flashmob on the Internet called “IngushregionVodokanal #gdetrubygdevoda”.

Earlier, Fortanga reported that the publication of a photograph from a polling station became a cause for proceedings in the Sharia court.

We should remind that the problem of water supply has been one of the most acute in the republic for dozens of years. In some settlements of Ingushetia there is no water all year round. When the previous two leaders of the region took office, they promised to solve the water supply problem. In January, 104 million rubles were allocated to solve drinking water problems in Ingushetia, the press service of the Ingush president and government reported. The money was used for the construction and reconstruction of water supply networks in Malgobek, as well as in the villages of Sunzhensky and Malgobeksky districts, the report says.