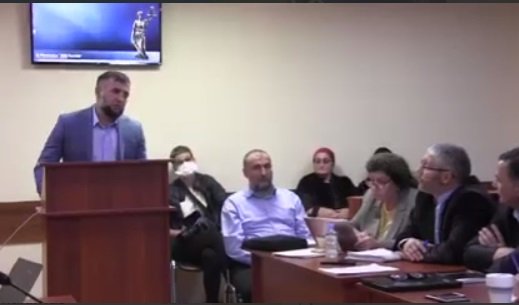 Former PPS platoon commander Timur Khamchiyev said in the trial of Ingush activists that the protesters left the square in Magas thanks to Malsag Uzhakhov and Akhmed Barakoev.

At a hearing in Kislovodsk, Timur Khamchiev said that on March 27th, at 3 a.m. he received a call from the company commander informing him that a general assembly was announced in the battalion.

“The information was that the rally (which was sanctioned), starting from 6 p.m. on the 26th (March) became unsanctioned. People didn’t leave the square. We need to get out there. Our task, as we were told, is to arrive at the site of the rally to replace the people, our staff, who were present on the 26th,” he said.

According to him, there were about 150-200 people standing in the square. The law enforcement officer noted that he had not observed any disturbances at that time. After that, Timur Khamchiev heard the sound of a stun grenade and a Rosgvardia operation of forcing people out of the square began.

“We stood along the motorway. The first attempt by the Rosgvardia – they failed. I don’t know why. Couldn’t do it. People continued to stand. I started asking my colleagues who were already standing there, what happened there, why people were standing in the square. They started telling me that people were waiting. Allegedly someone promised that they would extend the sanctioned rally, and that’s why they were waiting for an answer,” said the former commander of the PPS platoon.

A witness told the court that he recognized the elders on the bench. According to him, Malsag Uzhakhov and Akhmed Barakhoyev persuaded and reassured the youth, saying that they were waiting for an answer.

“The Rosgvard has made another second attempt. I’ve been involved in dispersing rallies more than once myself. I know how to do it. I don’t know why 40-50 people went in there. They themselves have begun an active phase of displacement. A couple of chairs were thrown, they broke the line, and the Rosgvard started to retreat <… > We had a civil trial. In this process, too, a video was watched. It’s been looked at in court, where we’re pulling these Rosgwartians out. We police pulled three people out,” Khamchiyev explained.

According to him, people were arriving at the square. Residents arriving for the rally were stopped at the entrance to Magas. And people abandoned their cars in the fields and arrived there on foot, the witness said.

“In the beginning there were 200 people, Rosgvardia could not implement measures to force them out. People were arriving, probably 500-600 people were standing. And you could see that people in Magas were piling up in their houses. Young people were arriving. The old people were already on the square. For the third attempt, Ural trucks and two armoured vehicles were brought to the square. The youth were stirred up. I see old people standing in the front rows, our adult elders standing, the young people calming down. And then I had already seen Barakhoyev Akhmed, Malsag Uzhakhov, and there were many elders. They stood in the front rows, coaxing the youth, reassuring them,” he said.

Khamchiyev stressed that he had talked to Akhmed Barakhoyev, and the latter explained the need to reassure the youth.

“He says, ‘You’re the only employees who talk to us normally. We will listen. You have our word, we will get the youth out of the square”. When I entered the square, officers from different units and from our battalion started coming in after me. There’s video footage that we’ve had in court. There were not the thirteen employees who have now been dismissed, but about 50-60 employees, if not more. Neither before our entry, nor after our entry, did the Rosgvardia make a move to oust the protesters. And the same on the part of the protesters – not a single person threw a stick. After we left the square, we stood for about 10-15 minutes. The adults were talking to the youth. Young people listened to them, left the place, even cleaned up the garbage,” he said.

Khamchiyev stressed that escalation of the conflict was avoided thanks to persuasion of the elderly youth.

“This could lead to an uncontrolled escalation <… > And not only within the republic. This could have led to unrest throughout the Caucasus. Because you yourself understand the issues that were at stake,” Khamchiev concluded.

The defence of the Ingush activists explained the state prosecution’s refusal to participate in the...