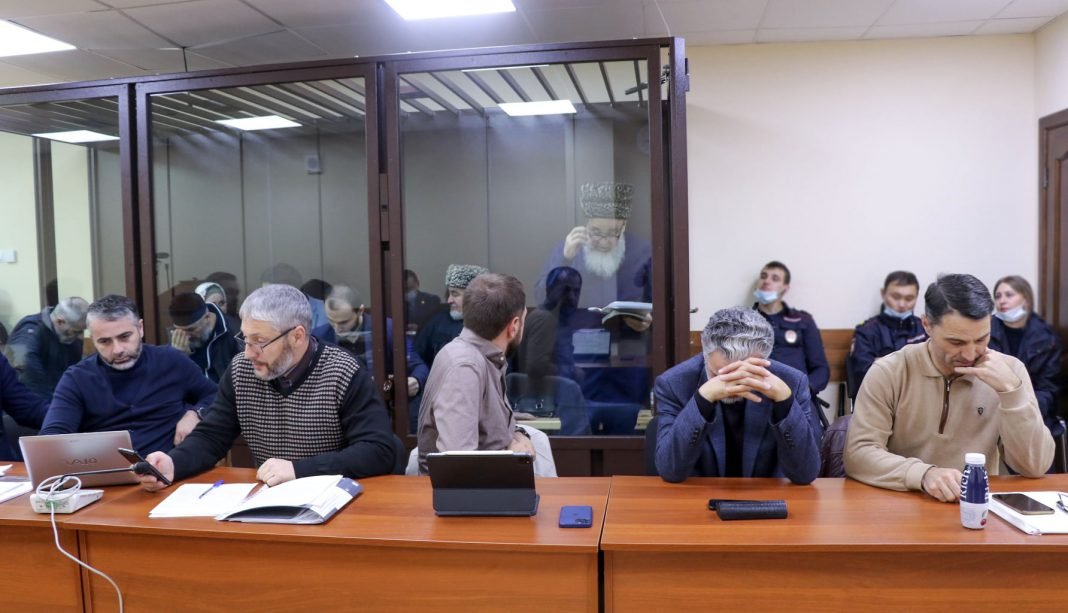 At the session of the Kislovodsk court political prisoner Akhmed Barakhoyev said that he and his comrades-in-arms were subjected to political persecution.
Barakhoyev told the court that he had not committed a crime and had not called anyone to commit a crime. According to the defendant, the “Ingush case” is not an ordinary criminal proceeding. This is a politically motivated attempt to massacre not only the defendants, but also the civil society of the Republic of Ingushetia as a whole.
“I was expressing my beliefs in a peaceful way, not forbidden by law”, elder Akhmed Barakhoyev began his speech. – But the rights of my people have been unlawfully violated and a historical injustice has been committed. I have therefore shown intransigence towards the violation of my people’s rights and the illegal appropriation of their land. The prisoners who are sitting with me are not guilty of anything”.

According to Akhmed Barakhoyev, historically the Ingush have had no leaders, no princes, as witnesses repeatedly told the court. Every Ingush is a leader for himself and has his own opinion. “Insofar as I have been made a leader, I accept this title with pride and honour and am ready to carry it,” the elder added.

He could not stand aside on September 26, when the rights of the Ingush people were “insolently trampled upon”, nor could he stand aside when indignant young people gathered near the Alan Gate in Magas. “A living person who loves his homeland, his land, his people and his youth could not sit at home. I felt it was my duty to get up, go and be with these young people in order to avoid any illegal, illegal [actions]. Because young people are hot, the issue is very serious, and the presence of elders reassures, there is an opportunity to influence. That was the mission. And, of course, disagreement with the trampled on our rights,” Akhmed Barakhoyev told the court.

According to him, Yevkurov deceived the president of the country and other leaders by telling them that everything was decided and they would not meet any resistance to the decision on the transfer of land, as the Ingush are disunited. However, he miscalculated. All as one Ingush stood up to defend the interests of their small motherland.

Elder Akhmed Barakhoyev added that he didn’t understand why he shouldn’t believe the decision of the Constitutional Court of the Republic of Ingushetia: “If my Constitutional Court ruled that this decision was illegal on October 30, why shouldn’t I believe my Constitutional Court? If it’s written in the law that the decision of this Constitutional Court of the Republic of Ingushetia is not appealable? I don’t understand why the Constitutional Court of Russia considered this matter. I don’t understand with what conscience could Yevkurov write a statement there against his own people? I don’t understand why the Investigative Committee, the Prosecutor’s Office and other bodies are not accepting applications from deputies who have written that [the decision] is falsified, wrong, illegal”.
Akhmed Barakhoyev said that during the trial he was able to get an idea of the concept of “extremism”. “I don’t think either myself or my ‘underlings’ should be sitting in that seat. The people who violated the Constitution that was adopted in Russia should sit here. The people who are supposed to protect the laws lie, cheat and politically order us here, having lost their conscience for the stars, for the chairs that warm them. They’re getting money in their pockets. I find it – anti-religious, anti-divine, anti-moral. These people are the ones who should be sitting here, not us,” the elder stated.

According to him, the defendants, who are in the dock with him, channeled all the negativity and energy of a possible social explosion into the legal sphere by their actions. People were able to express their indignation and dissatisfaction with the processes taking place in the republic in a civilized and publicly accessible manner. What happened on the morning of March 27, 2019, according to Akhmed Barakhoyev, is a clear provocation by the authorities.

“I am convinced that this case is not an ordinary criminal proceeding. This case is a politically motivated attempt of reprisal not only against us, but against the civil society of the republic as a whole,” said Akhmed Barakhoyev.

Criminal proceedings on the Magas events were instituted against 52 people, three of whom have been terminated. According to data from the Memorial Human Rights Centre, 37 people have been convicted in the Ingush case. All the trials are taking place outside the Republic – in Stavropol Krai. “Memorial” considers all seven persons accused of creating an extremist community to be political prisoners: Akhmed Barakhoyev, Musa Malsagov, Ismail Nalgiyev, Zarifa Sautieva, Malsag Uzhakhov, Bagaudin Khautiev and Barakh Chemurziev, Akhmed Pogorov.

The nationwide commission to review issues related to the territory and boundaries of Ingushetia, established at the World Congress of the Ingush People, has published its report, in which it approved the illegality and groundlessness of the 2018 boundary-setting agreement.

Parishioners of the Altiyevo mosque spoke out in support of political prisoners in the “Ingush...