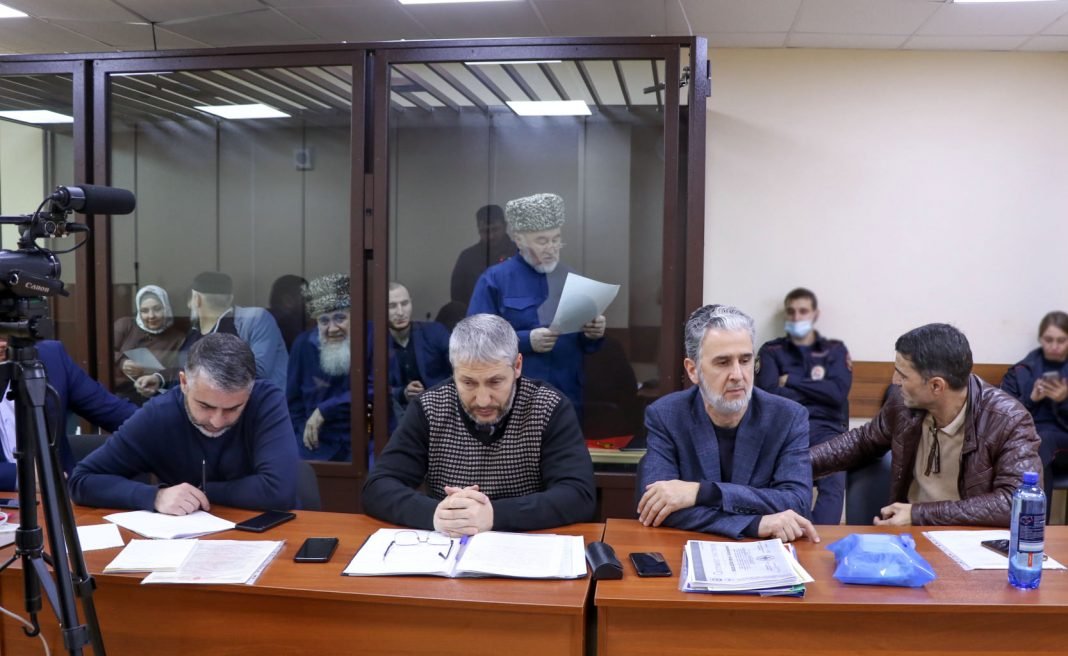 Malsag Uzhakhov, the defendant in the “Ingush case,” testified at an off-site session of the Kislovodsk city court in Essentuki as part of the evidence presented by the defense.
According to Malsag Uzhakhov, the only thing that the prosecution has managed to prove is that he is the chairman of the Teip Council, which he has never denied. “During the two and a half years of investigation of the criminal case by the investigative authorities and court proceedings, the prosecution’s version of the case has been fully confirmed only insofar as I am the chairman of the Teip Council,” Malsag Uzhakhov noted. – I was indeed involved in the creation and management of the Council of the Teips of the Ingush People, a non-profit organization. I don’t deny it, and I’m proud of it.
At the same time, the evidence collected by the investigation and the evidence presented by the defense completely refute my involvement in inciting citizens to commit unlawful acts. According to the chairman of the Teip Council, the prosecution has not presented a single piece of admissible and credible evidence of the guilt of those sitting in the dock. He noted that the prosecution version in this part is legally untenable and completely flawed, starting from the period of the alleged establishment of the extremist community and ending with its set and achieved goals.
Malsag Uzhakhov stressed that the people who fabricated this case refuse to appear in court. “If we are accused of something, it has to be proved, but neither the investigation nor the prosecutor’s office are going to prove anything, although, according to Russian law, it is their duty to do so. And we are working in their place. We’re trying to prove that we’re innocent”, stressed the chairman of the Teip Council.

Malsag Uzhakhov stated that neither on May 31, 2018, nor after that date, did he create or lead an extremist community, nor did he participate in one. “The prosecution alleges that I, together with Barakhoyev and Malsagov, created and led an extremist community in the composition of the persons indicated in the indictment.
In my firm conviction, based on the studied materials of the criminal case, the prosecution version is completely absurd due to the fact that as of May-June 2018, and even more so the period preceding the said date, I knew neither Barakhoyev nor Malsagov personally. Wasn’t familiar with them. And also in that period of time I didn’t know other members of the so-called community, except Bagaudin Khautiev, whom the Council of the Teips of the Ingush people sometimes invited as a lawyer from the Bar Association to consult on arising issues,” Malsag Uzhakhov told the court.

According to Malsag Uzhakhov, the accusation that the so-called Ingush protest leaders were motivated by career aspirations and wanted to take up leading positions in the republic is also unfounded. Having worked as the head of Roszdravnadzor from 2006 to 2012, Malsag Uzhakhov voluntarily retired of his own volition. “I didn’t aspire to any positions, I didn’t need them. <…> I had no political ambitions or desire to work in the system of execution of power in general”, – added the chairman of the Teyp Council.

He also indicated that he was making all possible attempts to prevent the civilians in front of the NTRC of Ingushetia from clashing with the Rosgvardia on March 27, 2019. “Had it not been for the elders, a lot of blood would have been spilled there that day,” said the chairman of the Teip Council. According to him, it was those who came to disperse them, not those who were present on the square, who wanted blood that day. There was no need to overclock. Elder called the accusation of organizing violence against the Rosgvardia officers total nonsense and fantasy of the accusation machine.

Criminal proceedings on the Magas events were instituted against 52 people, three of whom have been terminated. According to data provided by the Memorial Human Rights Centre,* 37 people have been convicted in the Ingush case. All the trials are taking place outside the Republic – in Stavropol Krai. “Memorial” considers all seven persons accused of creating an extremist community to be political prisoners: Akhmed Barakhoyev, Musa Malsagov, Ismail Nalgiyev, Zarifa Sautieva, Malsag Uzhakhov, Bagaudin Khautiev and Barakh Chemurziev, Akhmed Pogorov.

* The organization is included by the Russian Ministry of Justice in the register of NGOs performing the functions of a foreign agent.

Video from the autumn rally in Magas became an argument in favour of Malsag Uzhakhov’s...