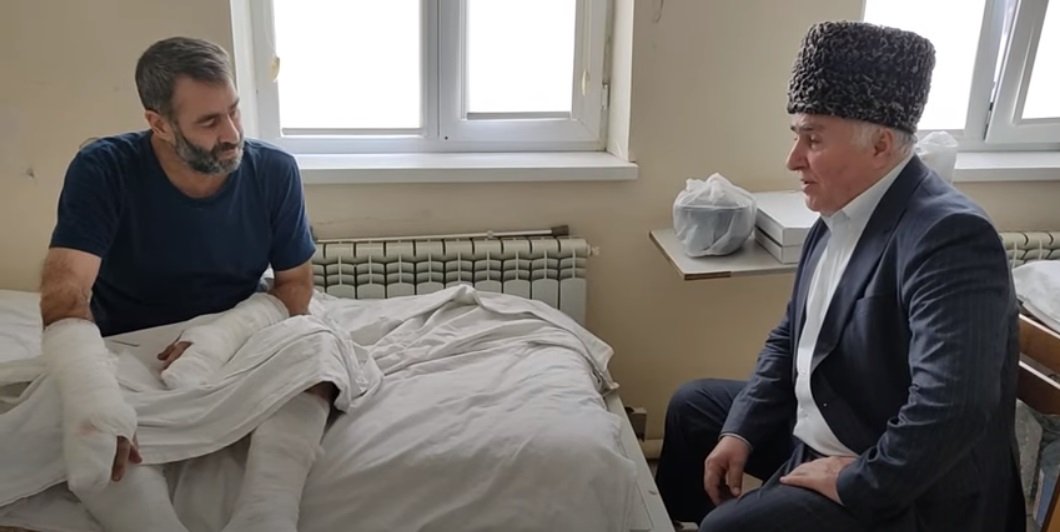 Former Ingush Labor Minister Osman Yevloyev was hospitalized with injuries after unknown assailants attacked him. He linked this to the investigation of a major corruption case and asked the Chairman of the Russian Investigative Committee and the Prosecutor General of the Russian Federation to investigate the case outside the republic.

Osman Yevloyev, a former assistant to the Minister of Labour of Ingushetia [Bagaudin Marshani], was admitted to the Sunzhenskaya Central District Hospital with multiple injuries and fractures. According to him, on November 26 at about 5:30 p.m. people in “masks” and camouflage uniforms broke into his house and beat him.

“They threw me on the floor and started beating me with a rifle butt, demanding to stop corrupt exposures. When they realized that they could not shut my mouth […] they decided to intimidate me this way. An 85-year-old grandmother was at home at the time; they also threw her on the floor, but she saw how I was beaten up,” said Osman Yevloyev.

The victim is certain that the attempted assassination was connected with the falsification of a criminal case concerning a major corruption offence committed with the participation of the former leadership of the republic. According to him, when Bagaudin Marshani was the head of the Ministry of Labour and Employment of Ingushetia, money “from all sides” was being “laundered” through his name in a fake way. The criminal investigation is still ongoing.

“In the process of studying the materials of the criminal case under investigation, I identified several thousand documents with signs of falsification. The last time we stated this in court, the investigator reviewed the protocols of inspection of documents and the ruling on the recognition of physical evidence, drawn up on 30 February 2017. February 30 never happens, even in a leap year. […] The prosecutor himself, laughed when we talked about what was going on”, – said Yevloyev.

He added that about 50 people confirmed that they had not signed the records of the investigation. The attackers in the beating mentioned the trial, Yevloyev stressed. “They were beating with butts on the joints, on the head, they wanted to kill. It was about the trials. […] It was said: ‘one should have kept silent’, referring to the trial. It was said that relatives would be next, and all words were accompanied by blows. They were wearing masks. After the visit of unknown persons, some valuables disappeared from the house,” he said.

The victim believes that those who handled the criminal case are interested in his silence. Yevloyev appealed to the chairman of the Investigative Committee of Russia and the Prosecutor General of the Russian Federation to investigate the case outside Ingushetia.

“The case materials are in court, about 50 people have confirmed that they did not sign in the protocols of the investigation. We ask to consider the criminal not in Ingushetia”, – he asked.

The co-chairman of the Mekhk-Khel NGO Сarazhdin Sultygov paid a visit to the victim. He said that the lawyer had written a petition for state protection for Yevloyev. Sultygov said that he is waiting for the reaction of the authorities of Ingushetia to the incident.

“I would like to officially address our leadership, the leadership of the Ministry of Internal Affairs, Prosecutor’s Office, FSB. We thought that these ‘mask shows’, murders, torture, were over, it turned out not so, now our people are doing it […] Raised their hand on the grandmother. The Yevloyevs, one of the biggest teips, won’t just let this go,” Sultygov said.

It is clarified that the attackers were in two cars. One of them, the gray one.
LADA Priora, caught on CCTV. A reward has been promised for information from eyewitnesses passing by the home that day.

“It is possible that anyone who drove along Kalinina and Rabochaya Streets in Sunzha that day had video recorders working in their car. We ask eyewitnesses to provide available photo and video information for a fee,” Yevloyev concluded.

We would remind you that the former Minister of Labour and Employment of Ingushetia, Bagaudin Marshani, was found dead in his home in Magas on February 25, 2018. His wife and son were found beside him in an unconscious state. The preliminary version was carbon monoxide poisoning, but the employees of specialized services did not find a gas leak.