We express our sincere appreciation to you for your steadfast and successful
to defend the interests of our country at the international level. We’re sure,
that in the period of the world’s reorganization Russia, as before in history,
will play a key role in building a new and secure world. Also
confident that our homeland will be among the strongest and most prosperous
We have all the prerequisites for this.

The Russian Congress of Peoples of the Caucasus is the only
The Russian public movement representing all of the Caucasus
peoples – North Caucasian “communities” in regions of the Russian Federation and diasporas from Transcaucasia.
One of the main goals of our Movement is the patriotic
education, the formation of civic consciousness and a full-fledged
The integration of Caucasian youth into Russian civil society.
We are grateful that you pay so much attention to the preservation of
peace and harmony in the North Caucasus, solving socio-economic
the problems of the people of this region.

Unfortunately, in this important region of the Russian Federation, there are still many
unresolved issues. Thus, in 2018-2019 in the Republic of Ingushetia
There have been events related to protests by citizens against
The unreasonable, in their opinion, establishment of the border with Chechnya
republic. As a result, dozens of community activists found themselves under
in custody, as well as subjected to administrative penalties.

In the North Caucasus, as you know, people have a reverent attitude toward
elders, women, and children. That’s why it especially pains us to see in the
The conclusion of respected Ingush elders Akhmed Barakhoev, Malsag
Uzhakhov and a young girl, Zarifa Sautieva. This fact causes
The people of the entire Caucasus were perplexed and disappointed.

In connection with the above, in order to strengthen civil peace and
In order to promote stability in the North Caucasus, the RCNK earnestly asks you to
humanity and to assist in the objective examination of this case and in
the release from custody of all Ingush civic activists.

We understand the importance of combating terrorism and extremism, in that
We are in solidarity with you, but it is impossible to apply similar repression to
social activists whose only fault is expressing their
civic position.

Peace in the Caucasus is an important factor of stability and a guarantee of
security in all of Russia, but security without justice and lack of
humanism, never leads to the desired results.

Dear Vladimir Vladimirovich, we wish you success in your
titanic work for the present and future of our country and are sure,
that you will not ignore our request.
Adopted at a meeting of the Presidium of the RSCC (December 14, 2021, Moscow)

With sincere respect,
chairman of the movement A.H. Totorkulov 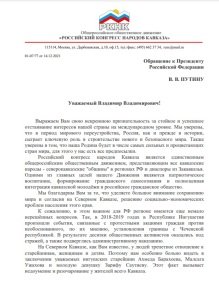 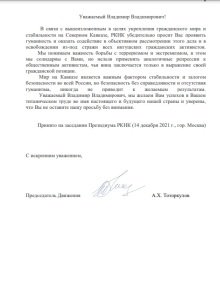