Новости Ингушетии Фортанга орг
Home News Relatives of an Ingush woman who fell into a coma are demanding... 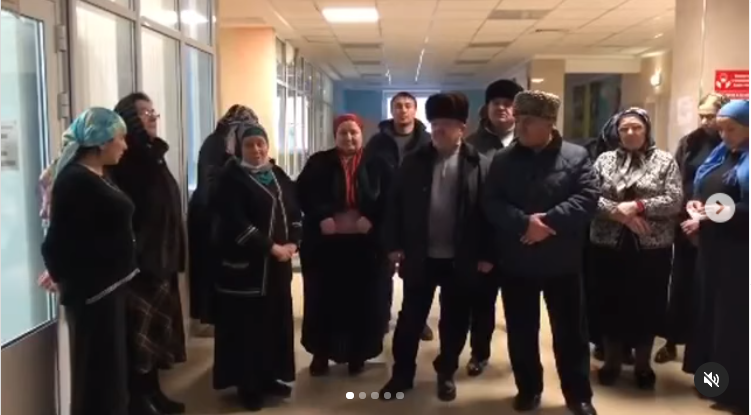 The relatives of 35-year-old Madina Ausheva, who fell into a coma after an operation at a perinatal center in Ingushetia, recorded a video appeal to the head of the republic, and also sent a request to the prosecutor’s office to check the actions of doctors at the medical facility.

The mother of six children was admitted to the perinatal center on November 29, gave birth to a boy three hours later, and the next day was in a coma from which she did not emerge for over a month, relatives said.

“Our woman gave birth safely, but […] fell into a coma. At first the doctors denied that Madina was in a coma, claiming that she would be back on her feet in three days. We brought a Moscow doctor to Ingushetia, found a specialist and he prescribed a prescription that local doctors could not do,” Madina Ausheva’s aunt said in the video.
Madina’s relatives believe that she received substandard medical care. They said Madina gave birth to a baby boy, which she told her husband five minutes later by phone.

“When Madina Ausheva called her sister and told her that she started bleeding, she immediately came to the maternity hospital […] Today the doctor (who delivered the baby) apologized to us, but claims that it was not her fault,” Patimat Bekova, the sister of the victim, told Fortanga.

She also said that when she came to visit her sister that night, she talked to the management of the perinatal center and was told that the doctors were unable to stop the uterine bleeding. Later, the relatives were told that the uterine amputation surgery was over, but the woman was in very serious condition, said Patimat Bekova.
“She’s been in a coma for a month. Doctors said she suffered a cardiac arrest for three seconds, allegedly causing oxygen deprivation of the brain and subsequently leading to a coma. But I don’t believe it! I talked to the perinatal center workers who were on duty that night, and they told me that […] my sister had been bleeding for five hours. At the time the doctor arrived, my sister’s blood pressure was extremely low, and on top of that she decided to undergo anesthesia to amputate her uterus. After anesthesia her blood pressure dropped even lower and her heart stopped,” said Madina Ausheva’s sister.

Doctors’ versions differ, says Patimat Bekova. She did not rule out that her sister’s medical records had been altered. According to the midwife, her sister was bleeding profusely, indicating that Madina had been manipulated to cure her uterus, while the doctors claimed that there had been no curettage, said the victim’s sister.

Now Madina Ausheva is on artificial respiration, in a coma, said Patimat Bekova. She said she filed a statement with the prosecutor’s office demanding a full trial. Madina Ausheva’s sister said that she had appealed repeatedly to the Ministry of Health over the past month, but they had stopped answering her phone calls.

No rehabilitation center in Moscow would treat such a brain lesion, said Patimat. “The doctors say she will lie like that unconscious for the rest of her life,” she added.

Recall that in 2018, Makka Khamuratova (Yevloyeva), a mother of six children, fell into a coma during a cesarean section operation at the perinatal center of Ingushetia. The woman is currently paralyzed and does not speak. Makka’s husband, Umar, treated her in Moscow for several months and then, with the help of relatives and fellow villagers, moved Makka to Paris in the second half of 2018. Upon her arrival, she was admitted in serious condition to a famous university hospital, investigated the cause of the paralysis, and began reconstructive treatment. At the end of July 2020, Umar Yevloyev asked for help in returning his wife Makka Khamuratova from France to Russia. On September 22, 2020, Macca was brought home.

Earlier, “Fortanga” wrote that the prosecutor’s office found numerous violations in the perinatal center of the republic, following a complaint from Tamara Ekazheva. She believed that medical errors had resulted in the amputation of her uterus and she would never be able to become a mother again. The nursing staff of the treatment facility also complained about the “lack of professionalism” of its management. The Ingushetian Prosecutor’s Office did nothing for almost a year, despite the appeal, and only began checking it after the story was published. As a result, Ekazheva’s complaints were confirmed, but the chief physician merely warned her to avoid such cases in the future.