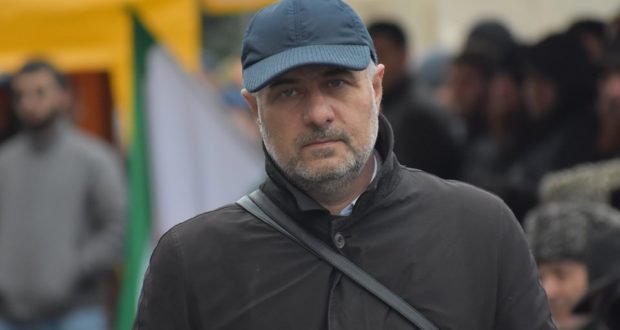 “Only two things are infinite – the universe and human stupidity, though I’m not sure about the universe.”
А. Einstein

On 16.03.21 Barakhoyev A., Uzhakhov M., Chemurziev B., Malsagov M., Khautiyev B., and Nalgiev I. announced to the court that they intended to start a collective hunger strike and refused to participate in court sessions starting from 17.03.21. The reason for this demarche In this case the most egregious situation was that of Z. Sautieva to whom judge Kutsurov Y.N. changed her preventive measure from custody to house arrest on 10.03.21. This is a god-awful concession to the defense for 23 months of pre-trial investigation and trial of the only woman out of almost 50 defendants in a criminal case from Ingushetia. All the more so since she has already spent 20 months in custody.

But even such a small thing has infuriated the prosecution side, represented by state prosecutors Zolotovsky T.S. and Handogyi D.A. On 10.03.21 the court changed the preventive measure for Z. Sautieva. The very next day, prosecutors file an appeal, and on the same day the Kislovodsk City Court, without waiting for objections from lawyers and defendants, forwards the materials to the Stavropol Territorial Court.

At the same time, a certain (“Major”) tried to break into the apartment where the owner of the dwelling provided to Z. Sautieva to stay under house arrest lived and to put pressure on her to terminate the rental agreement. After checking his phone number through the Gett application, it turns out that he is identified as a possible FSB officer for the Chechen Republic, living in the city of Pyatigorsk. Given that the FSB’s 2nd Service is providing operational support on the case, the connection is quite consistent.

On March 16, three working days later, the Stavropol Krai court hastily reverses the decision of the Kislovodsk city court and changes the preventive punishment for Sauatieva Z. back to detention; moreover, the court session is held without the participation of the other defendants and five lawyers. There is no doubt that the slow-moving judges could have demonstrated such speed only if they had received a “magic” kick from the Prosecutor General’s Office and the FSB.

The whole chain of events, significant violations of rights, caused justifiable indignation and resulted in a legitimate demarche on the part of the defendants. And this is quite understandable and understandable, because the legal mayhem by employees of the Prosecutor General’s Office and the FSB of the North Caucasus Federal District that continues with the cowardly connivance of the judicial corps is simply out of control and has crossed all limits of patience. The defendants could not have acted otherwise, as this act is consistent with their principles and stance in life. The defendants are taking extreme measures in order to draw the attention of the Russian and world community to the outrages committed at the system level by some employees of the federal law enforcement agencies located in Yessentuki, including investigators and prosecutors.

In the meantime, the defendants’ lawyers are preparing an appeal against the ruling of the Stavropol Territory Court and an application to the Investigative Committee of the North Caucasus Federal District in accordance with Art. 144-145 of the RF CCrP against an unidentified FSB officer. At the same time, another complaint will be sent to the ECHR about violations of the rights of the defendants by the Russian judicial system. The defendants hope that there are still adequate and sensible leaders in the leadership of law enforcement agencies of the North Caucasus Federal District who have retained their ability to analyse the facts, the current difficult situation in the country and beyond it, and to make correct forecasts for the near future.

In 2018, the Ingush people, without any reason, prerequisite, guilt, in a completely brazen way was robbed by three top government officials of Russia: Y.B. Evkurov, R.A. Kadyrov and A.A. Matovnikov. Six months of confrontation between the people and the authorities led to mass clashes between protesters and Rosgvardia soldiers on 27 March 2019, which in turn led to criminal and administrative prosecution of hundreds of residents of the republic.

At present the level of trust in the federal authorities in Ingush society is extremely low, close to zero. Radical sentiments among the population are growing and an ideal environment for passionate movements is developing. Under such a disposition the slightest provocation may destabilize the political and social situation not only in the republic itself but also in the entire Central Caucasus.

It would seem that in such a situation the authorities should undertake a set of measures which would reduce tension in Ingush society and establish harmony between the various political forces. But the opposite is happening. After all, it is no secret that the trial of the leaders of the popular protest is an irritant to Ingush civil society. The defendants are very popular in the republic and outside it, they are respected and loved. Accordingly, any violations against the defendants by the judiciary arouse the Ingush people’s extreme irritation and indignation.

Judge Kutsurov Y.N. demonstrates high professionalism and competence, which strikingly distinguishes him from the faded background of the judicial corps of Kavminvod. The judge is distinguished by his patience with respect to the emotionality of the defendants and with respect to the linear, soldierly thinking of the prosecutor Zolotovsky T.S. He tries as much as possible to ensure the principle of equality and adversarial proceedings in the judicial process.

The defendants have also patiently listened for four months over the course of 25 court sessions to the “procedural garbage” that investigators Naryzhny and Romanov collected in 120 volumes. What is preventing the state prosecutors from quickly and efficiently, without aggravating the situation, to bring the trial to its logical conclusion and finish this “soap opera” to the mutual satisfaction of all parties? It is unclear why the state prosecution, with the support of the FSB, is inflaming the situation and creating prerequisites for disrupting the trial, provoking the defendants? Is this their personal initiative or a directive from management? What purpose do they serve? Their consistent actions appear to have the same aim – to provoke mass unrest, create another political crisis in Ingushetia and a new headache for the administration of the President of the Russian Federation.