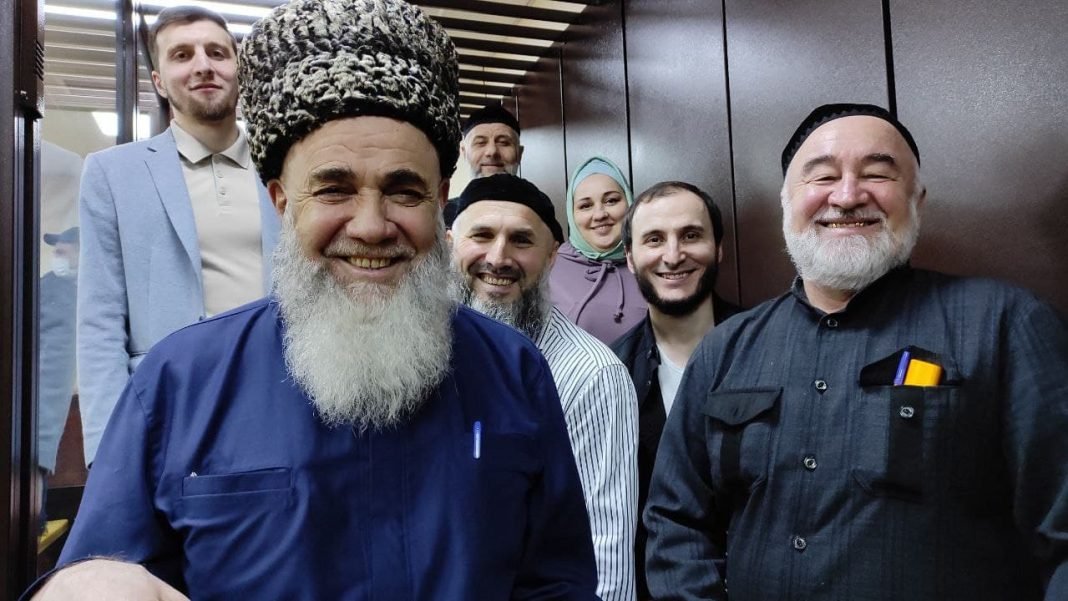 On August 11, at the meeting on the rally case in Essentuki City Court, the defense denied the version of the prosecution that Malsag Uzhakhov created an extremist community. A linguistic psychologist found no extremism in the words of Zarifa Sautieva at the rally.

This defense witness is a key one, the lawyer explained. “The indictment states that not later than May 2018, Malsag Uzhakhov, Akhmed Barakhoyev, and Musa Malsagov held rallies, united and created an extremist community with the purpose of destabilizing society, experiencing political hatred towards the current authorities of the republic. The evidence for accusing Malsag Uzhakhov of creating an extremist community dates back to June 2018, when a rally was held in front of the Ingush Parliament demanding that members of the People’s Assembly adopt a law on direct elections of the head of the Republic of Ingushetia and return the mixed system of electing deputies. The prosecution falsely attributed the organization of this action to Malsag Uzhakhov, and from that moment the discourse about the extremist community was formed”, – said Kuriyev.

He noted that Malsag Uzhakhov, Akhmed Barakhoev and Musa Malsagov did not even know each other and did not communicate at that time. “But by recreating a false chronology of events, the prosecution is creating the illusion that some kind of subversive anti-government activities were being carried out by the defendants long before the rallies protesting the boundary change agreement, and is pinning a key role on Malsagh in creating that community,” the lawyer said.

A key witness for the defence, who at the time was head of the regional branch of the Defenders of the Fatherland political party in Ingushetia, stated that he was the direct organizer of the event. “It was he who filed the notice, it was he who issued the warning, it was he who gave explanations on these events. He provided the originals of all these documents to the court, they were examined and attached to the case materials,” Kuriyev explained.

The witness, by submitting relevant original documents and testifying at trial, effectively refuted the charge in this part. “The investigation in this case made a mistake or purposefully acted. Malsag Uzhakhov not only is not the organizer of the rally in June 2018, but was also acquitted by the court as a participant. The administrative case was dismissed. We returned the previously paid fine of 20,000 rubles”, – said the lawyer.

Kuriyev also said that the adversarial principle was not respected in the rally case. “The paper tolerates everything. Since the prosecution argues something, the court acquiesces. The CPC is there, but in practice it drifts. But today we have refuted the charge in this part. Malsag has nothing to do with the organization of the June rally in front of the parliament of the republic,” Kuriyev said.

A total of seven defense witnesses were questioned at the August 11 meeting, all of whom were not present at the square in Magas on the night of March 27, 2019, but had participated in rallies against border changes with Chechnya in fall 2018 and spring 2019. They unanimously said they participated in the protests out of their hearts, lawyer Magomed Bekov told Fortanga.

“They thought it was wrong to sign the boundary change agreement, and later, in the spring of 2019, they were outraged that they wanted to amend the law to remove the paragraph about the right to a referendum,” the lawyer explained.

He said that in fact all those who were interrogated spoke of their hostility towards Evkurov. “People were outraged that Yevkurov repeatedly spoke out about the lack of land in Ingushetia, but behind the scenes, secretly from the people, without holding a referendum, he signed this agreement,” Bekov said.

Witnesses also said that during the rallies there were no calls for extremism and no attempts to manipulate the minds of people in the square and calls for unlawful actions on the part of the defendants.

He also said that the court denied the request of lawyer Kaloy Akhilgov to summon former head of Ingushetia Yunus-Bek Evkurov and former Chairman of the Government of Ingushetia Zyalimkhan Evloyev as witnesses.

The refusal was justified by the fact that the former head and the former prime minister could not explain anything useful to the court, were not participants in the criminal proceedings, could not say anything about the events of March 2019 and about the creation of an extremist community.

The court unreasonably refused to satisfy this application, believes Bekov. “The defense has a number of questions to these people [Yunus-Bek Yevkurov and Zyalimkhan Yevloyev]. Yevloyev coordinated all the rallies, the approvals came under his signature. At the March rally Yevkurov came out to people, and his guards provoked those present to act inappropriately towards the head. Evkurov said on national TV that ‘all the participants and organizers of the rally should be taken and put in jail’. There are also questions to him about the agreement as well. What was the motivation for this decision? Why did he change his previous, completely opposite position of “Not an inch of land!”? Why did he violate the oath that he would uphold the Constitution and preserve the territorial integrity of the republic that he took when he took office,” the lawyer said.

In the case of conviction, the defense plans to appeal against the baseless refusals to call witnesses along with the final court decision, the lawyer explained.

At the meeting, Lilit Mesropyan, a linguist-psychologist from Rostov-on-Don who specializes in speech aggression problems, head of the expert institution, refuted the accusation of Zarifa Sautieva of extremist statements during the rally, criticizing the examination conducted earlier. This was said by lawyer Bilan Dzugaev, who had previously sent a lawyer’s request to Mesropyan regarding the expert opinion, which is available in the materials of the criminal case on Sauatieva’s statements at the rally.

The lawyer explained that she was referring to her phrases: “Don’t break the line, idiots! Stand back and don’t throw chairs”. An expert from the Chamber of Commerce and Industry of the Chechen Republic regarded them as appeals to violence.

“I asked her [Mesropyan] the question: ‘Is this expert opinion, which lies in the case, made by an expert of the Chamber of Commerce and Industry of the Chechen Republic, consistent with the norms of the law and their expert activities? Lilit Mesropyan gave an opinion, the essence of which is that, among other things, the Chechen expert was not authorized to conduct this expertise, because he did not have the relevant competence and education. Today I ensured the appearance of the specialist in court, where Andrei Sabinin and the other lawyers questioned her about the report she gave on the expertise in the case. And she’s on record, on her own recognizance, confirming her arguments. Among other things, she explained that there was nothing destructive and aimed at inciting hatred or calling for the use of violence in the statements of Sautieva at the rally,” said Mesropyan.

The expert linguistic report dated 11 April 2019 was performed at the request of the FSB of Ingushetia by Artur Algayev, an expert of the Chamber of Commerce and Industry of the Chechen Republic, and it formed the basis for the arrest of Zarifa Sautieva. And the charge was based on a video that Zarifa herself filmed live at a rally in Magas in June 2019, the Caucasian Knot reported earlier.

The next hearing in the case is scheduled for August 24. There will be no sessions next week as the judge is going on leave.