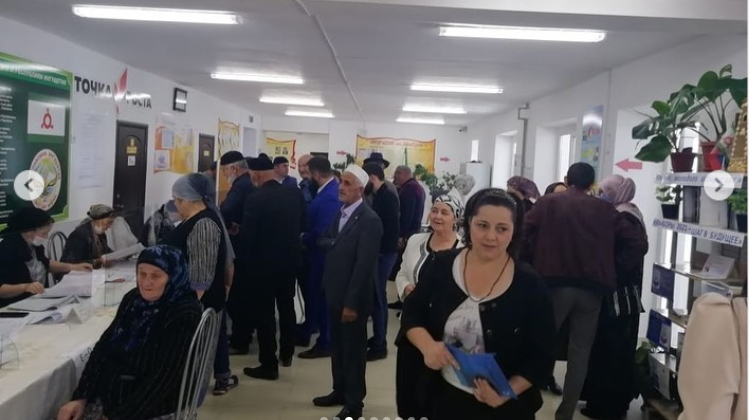 Most of the deputies who passed to the Russian State Duma and the People’s Assembly of Ingushetia according to the results of recent elections, little-known to the voters people who are far from the political life of the republic and the problems of its inhabitants. They are loyal to the policy of regional authorities, so one should not expect them to support the resolution of pressing issuesThe public figures told “Fortanga”.

The election results in Ingushetia were completely falsified, and the real turnout in the Ingush elections did not exceed 10-25 percent, says human rights activist Magomed Mutsolgov.

In the absence of other means of election observation, possible turnout and the percentage of votes for United Russia can be calculated by comparing it with the number of people attending protest and pro-government rallies, the human rights activist suggested. “There are 230,000 adults in Ingushetia. Can United Russia gather 80 percent of that if 100,000 people turn out for a protest rally under the cameras – taking into account that some are afraid of losing their jobs, some cannot rally because of their position, some have relatives in the authorities and do not want to cause them problems? Of course not. All the more reason for them to vote for people whose policies have only exacerbated existing problems, not solved them. (Among them) corruption, water supply, sewerage, waste recycling. “United Russia has never been able to bring more than a thousand people to a single pro-government rally. Moreover, it won’t be able to do that when there are political prisonersin the republic,” Magomed Mutsolgov explained.

The past elections are essentially “a kind of legalization of this or that authority,” he said. “There is no political struggle, transparency, observation of the electoral process. There is a procedure according to which people write something, but the election commission eventually publishes the result it is told by the customer. Administrative resources, military personnel, state employees are forced into the election process,” he said.

Isropil Nalgiyev, a former political prisoner and activist in the protests, considers the elections to be “unconscionable manipulation” which “totally failed to reflect the real mood of the Ingush population”. “I am sure that the final voting protocols were simply forged here as well. As, by the way, they did it all previous years,” he said.

Nalgiev believes that an absolute majority in the republic has a negative view of United Russia after the 2018 boundary agreement was adopted. “It has not been supported before – after all, its officials (members of the party “United Russia”) have been stalling the law on rehabilitation for 20 years,” he said.

In the opinion of the Yabloko party, the turnout in the elections was overstated by at least three times. “The difference in the votes went to the parties that the authorities were dragging into the People’s Assembly and the State Duma. If the figure of 14 million votes attributed across the entire country was announced, then in my opinion it was at least 140,000 in the republic,” explained Ruslan Mutsolgov,chairman of the Ingush regional branch of the Yabloko party.

The upcoming elections seemed inevitable after the spring primaries of the ruling party, he said. “At that time, the participants of the “Yedr” internal party elections in the republic themselves complained about mass falsification… what can we expect from the parliamentary elections?” – the politician wondered.

Ingush National Assembly deputy of the sixth convocation Zakri Mamilov agrees that the actual voter turnout was not more than 10-12% of the total number of voters. “Almost all the polling stations were empty. The turnout of 80 percent, like the fact that 85 percent voted for United Russia for the State Duma and 82.1 percent for the People’s Assembly, is absolutely untrue,” he said.

He considers the absence of the CPRF in the People’s Assembly to be the result of falsifications. “Realistically, people almost did not vote for the LDPR. The majority – both according to polls and voter statements – voted for the CPRF in the People’s Assembly and for Ruslan Mutsolgov in the State Duma. The official results turned out to be exactly the opposite,” he said.

Zakri Mamilov said that as a matter of principle he did not run as a candidate on the United Russia list. “They would not have allowed me to register like Beyal Yevloyev and Ayup Ozdoyev,” he believes.

Mamilov considers the internal party primaries in United Russia to be a procedure that simply legitimizes the list of candidates for the party. “In the primaries, the party leadership brings to the counting boards the order of candidates on the list – the first 60 people. Then the number of votes is adjusted according to the ranking. Then this list is approved at the political council,” said Zakri Mamilov.

According to Magomed Mutsolgov, the new People’s Assembly will be even more amorphous and subordinate to the Kremlin than before. “It (parliament) is not elected. We know how people are appointed there. The power hierarchy is built in such a way that it does not represent national and regional interests… These people will never pass laws that they themselves initiate. They will only implement the will of the republic’s leadership and the latter, in their turn, will comply with what the Kremlin handler tells them,” he concluded.

Zakri Mamilov noted that he hardly knows any new members of the People’s Assembly. “But by analyzing and talking to people, I can conclude that parliament will be just as faceless, tame, totally controlled from above. No independent decisions of principle on the whole range of national problems facing the republic – economic development, social issues, restoration of territorial integrity – will be made. Stagnation will continue in our republic,” he said.

However, the politician believes that “if 80-90 percent of voters came and voted, it would be simply impossible to falsify the results to such an extent.

Activist and former political prisoner Bagaudin Myakiyev is also sceptical about the new composition of the People’s Assembly of Ingushetia. “27 out of 32 members of the People’s Assembly are United Russia deputies, who did not allow those 10-11 deputies, who came out in the square for the people, to take part in these elections. They were kicked out when the documents were accepted. The new deputies are just like these 27: they won’t say a word for the people and for the prisoners of our protest, they are afraid to call for implementation of the law on the repressed peoples,” he said.

Ruslan Mutsolgov, who ran on the “Yabloko” party list for the Duma, noted that not a single candidate not loyal to the authorities was permitted to take part in the elections to the People’s Assembly of the republic on various pretexts. “The system itself is built on lies and imitation of everything, including the tumultuous activities of officials. And now the authorities have imitated elections,” he explained.

Muslim Tatriyev and Bekkhan Barakhoyev, who won the State Duma elections, did not participate in the political life of the region and did not express their position on the most important issues of Ingushetia, said Isropil Nalgiyev. The official figures of 100-150 thousand votes for them are “just fantasies of the CEC accountants,” he believes.

“Good people and good businessmen are not enough to represent the people in the country’s main legislative assembly,” Nalgiev said.

“As socio-political figures these people are unknown to me. They’re just businessmen, they lived happily ever after, getting rich on the side, and today they have the opportunity to come to the State Duma,” Magomed Mutsolgov commented on the election of Tatriev and Barakhoyev. He believes that legal professionals should be elected there and be able to legislate. “The deputy should declare his income and have a reputation of being involved in public life, of being useful. I don’t see the result of their activity other than the fact that they are wealthy people”, – explained his attitude the human rights defender.

“Muslim Tatriev was the head of the oil workers’ collective. I first heard Bekkhan Barakhoyev during the pre-election videos on the Internet. I think they will work in the same way as our previous representatives,” believes Zakri Mamilov.

Earlier, acting deputy head of the region’s electoral commission Muslim Albogachiyev announced that according to preliminary data, 197,264 people out of 234,600, or 84.06 percent of Ingushetia’s voters had voted.

As a result of the elections to the People’s Assembly, United Russia received 27 mandates in the regional parliament, three seats were held by the Just Russia-Patriots – For Truth party, and the LDPR had the remaining two mandates. It is noted that the name of the new speaker of the Republican parliament will be known in the near future following the results of the party’s conference. Magomed Aliskhanov was elected head of the “United Russia” faction in the parliament.

United Russia’s Muslim Tatriev won the elections to the State Duma in a single-mandate constituency, receiving 71.99 per cent of the vote. Bekhan Barakhoyev became the second deputy of the Russian State Duma from the United Russia party.