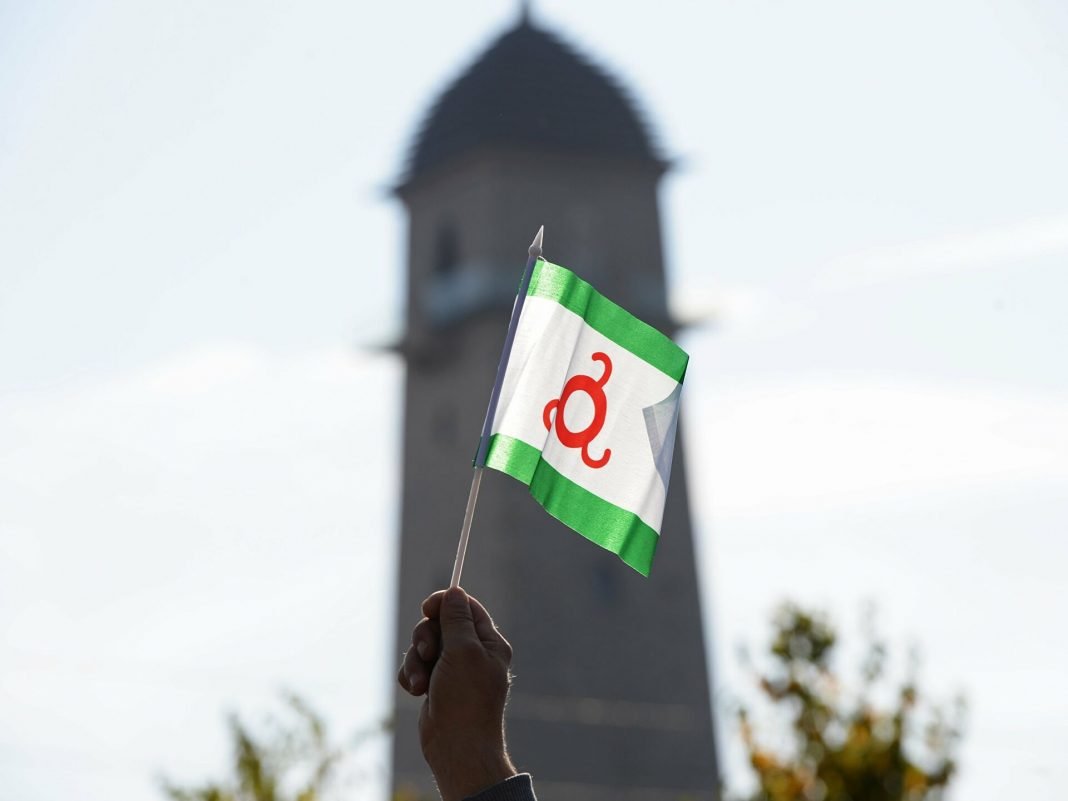 In the messenger WhatsApp a recommendation to call themselves Orstkhoi (an offshoot of the Vainakhs, some of whom consider themselves Chechens and others Ingush) spread among the residents of Ingushetia in time for the start of the census. The activists considered this to be yet another provocation against the Ingush.

Here is what is stated in the methodology sent out on WhatsApp in the Ingush segment: “Allah created you to be what you are. Your ancestors have passed on to descendants, and then to you, from generation to generation, that you are Orstkhoi. During the Caucasus War, both Imam Shamil and Tsarist Russia called your ancestors Orstkhoi. In 1884, Russia conducted a census, where your ancestors were recorded as orstkho. The Prophet Muhammad said: “Anyone who declares himself not a son of his father, knowing this, is bound to fall into disbelief. And whoever declares that he is not his own people, let him prepare to take his place in the fire.” So check the record of the census taker who will come to you in autumn 2021, where in item 14 “your nationality”, it should be written Orsthoy, and in item 12 “mother tongue” – Orsthoy”.

Matieva: the authors of the messages want to bring discord between the peoples

Some residents of Ingushetia have suggested that the call may be connected with an attempt to artificially lower the population figures in order to annex the republic to Chechnya. However,
Yakub Gogiev
the founder of the Dzurdzuki historical and geographical society, and director of the “School of Ingush Adats” project believes that the initiative with the Orstkhoi looks like a child’s game.

“How is it possible to forcibly assign people to a different ethnic group, which allegedly does not coincide with the Ingush language and culture. We are so intertwined that there is no way of wresting the Orstkhoi from the Ingush. On the other hand, I have a rhetorical question. If everyone in Ingushetia calls themselves Orstkhoyevsky in the census, and there are none in Chechnya, then can we claim a part of Chechnya where Orstkhoyevsky could potentially go? Stupid and ridiculous situation. It looks more like a provocation that haunts the Ingush people year after year – for many they are like a bone in the throat. Liquidation of Ingushetia will not take place. And if someone tries, we will stage such a protest that the events of 2018-2019 will seem irrelevant,” Gogiev told Fortanga,

According to the activist and political analyst
Angela Matieva
She says that it is difficult for her to say who might be the initiator of such appeals, but such work has its ideologists, possibly its generous sponsors who are profoundly indifferent to the interests of both the Ingush and the Chechen peoples. They have one goal – to bring discord among nations, she is convinced.

“One cannot but be aware of the long-term underground work of these provocateurs in Ingushetia, and in particular, in the power structures of Ingushetia and at the federal level. Another question: why they are permitted to engage in such activities is not quite clear to me. All the people behind this “work” have one thing in common – no matter what society you come from, no matter what part of Ingushetia you come from – the Karabulaks (orstkhoi), the Galashevs, the Dzheirakhs, the Nazranovs, the Angushevs, the Fiappis, and so on. – they all consider themselves to be Ingush,” Matieva stressed.

She also noted that the Ingush were a very conservative people, in which even inter-ethnic marriages were severely discouraged. If historically and genetically different local communities considered themselves distinct peoples, as the Chechens and the Ingush, for example, do, there would not be such a blood entanglement between them. Most importantly, there is no documentary evidence that the Orsthos were a separate people with their own language and culture.

“But the greatest proof of this is the contemporary self-identification of people from various separate societies who live on Ingush lands, including those held by our neighbours, under the guise of various pseudo-legal acts. All of them consider themselves to be Ingush. A thousand times I have heard the phrase, for example, “So g1alg1a va, oarstkhoi ovla bolazh” – “I am an Ingush with orstkhoi roots”. And that is the self-identification that the exiles are failing to achieve. And they won’t, I’m sure of it! Is there anything stronger than the call of blood, historical and genetic memory? The most important thing for all of us now is not to drive a wedge between the Ingush and set us against each other,” – said Angela Matieva to Fortanga.

Historian and representative of the Orskhoi
Khamzat Fargiev
sees in these messages an attempt to encroach on the republic’s territory. “This trend has a long history dating back to the late 1980s. The aim is to prevent the formation of the Ingush republic or, as a last resort, to drive the Malgobek and Sunzhensky districts into Chechnya,” he told Fortanga.

A member of the Council of Teips of Ingushetia and representative of the orstkhoi
Ibragim Merzhoyev
made a statement pointing out that there were certain groups of people who were working to divide the people of the republic.

“Ingushetia has a glorious, centuries-old history. Our people have faced arbitrariness and injustice many times. Each time we have overcome these ordeals with dignity and honour. The status of an equal and independent region of the Russian Federation was obtained by Ingushetia with great efforts of all our people. Statehood is the most important condition for the Ingush people to preserve its national identity. In the course of history, in the process of ethnogenesis of the Ingush people the following Ingush communities, which formed a single nation and republic, participated on an equal footing: Tsorin, Galgayev, Fappa, Jeyrakh, Angush, Nazran, Nizhne-Karabulak, Galashev, Meredzhin, Yalkhara, Akka, Kay, Malchistin… The main task of the state authorities and all the people of Ingushetia is to preserve our statehood and ensure peace and harmony in the republic,” reads the statement of Ibrahim Merzhoyev at the conference of the Teip Council of Ingushetia.

It is noted in the appeal that the council of teips is concerned about the statements of some individuals who are trying to question the sustainability of the republic and the necessity of its existence.

“Groups of people have also appeared who are engaged in disunity of our people, distorting historical facts and documents. They are trying to set the Ingush people against each other on the basis of teips and to bring discord into our society… We warn these people about their personal responsibility, first of all before the Almighty and then before the people, for their provocative and destructive activities and call on the residents of the republic to refrain from statements and actions that contribute to destabilizing the situation in Ingushetia”, – stressed Merzhoyev.

Commenting on the census campaign, the head of the Ingush branch of the Yabloko party
Ruslan Mutsolgov
said that the authorities justify their need for the census by the alleged prospects for the development of the country and its regions, “but in reality, there is no development, not even an attempt at it.

“This(the call to participate in the census) could have been heeded if the authorities had not created a system of widespread lies, imitation of their activities within the functions assigned to them, total aggression and repression and many other negative factors in relation to the people. I don’t see any benefit for the republic from this census, the more so as the events of the past few decades show us the face of this government with regard to the people of the republic and its interests,” Mutsolgov expressed his opinion to Fortanga.

He added that he doesn’t know how local officials “benefit from inflating the number of people who have died and are leaving the region.” But he is sure that the population figures are used in electoral processes.

“I have also heard the version about the “inflated” number of regional residents, but I am sure that this is a ubiquitous trend that does not necessarily have only a North Caucasus connection. One thing I know for sure – in times and in system of ubiquitous lying and not caring about ordinary citizens of the country it will not be possible to receive unconditional participation of the population in census. People don’t like this kind of attitude towards themselves, that’s why they don’t want to participate,” Mutsolgov summed up.

However, Yakub Gogiyev believes that the population of Ingushetia is increasing – by 8-10 thousand people annually; about 1,600 people are dying. “I can judge from my own clan. The population of my teip has doubled in the last 20 years,” Gogiev said.

Angela Matieva is also sure that there are no problems with the birth rate in Ingushetia. There’s a crazy longing for their land in the republic, and that’s why there aren’t so many people leaving either, although recently there has been an increasing desire to leave Russia, she said.

“We don’t need additions. We, the Ingush, are already at least 600-700 thousand people, we all need to take part in the census. And we also need to clamp down on anyone who takes the liberty of creating divisions in our people. I am sure that lately, on the contrary, the Ingush have become even more drawn to their history and feel themselves even more like g1alg1ays. That’s why the actions of those who live with dreams of destroying Ingushetia are being crushed to smithereens,” summed up Angela Matieva.

Young people in Ingushetia were outraged by the statements of the “Nazi Council” on the...