Новости Ингушетии Фортанга орг
Home News A participant in the Vladikavkaz shooting said that the incomplete video from... 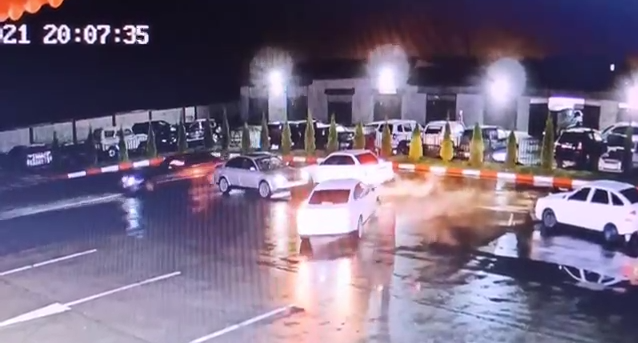 The published 10-minute video-recording from a video-surveillance camera at the petrol station on Kartsinskoye Highway in Vladikavkaz presents an incomplete picture of what happened, Akhmed Kotiyev, the victim of the shooting, told Fortanga.

“There’s no beginning. If you add to this 10-minute video, another 10 minutes before the start of the conflict, the whole picture is clear. The instigators of the conflict are Ossetians,” he said.

The victim, Akhmed Kotiyev, stated that he had stopped at a petrol station to get petrol. According to him, nothing was planned against Ossetians. That’s how he describes what happened.

“I, personally, came to get gas. I bought water and cigarettes, pulled into a dead-end section of the gas station, parked, and started watching a movie. In the meantime, an Armenian acquaintance drove up to me in a white Volkswagen. I stopped the movie, we started talking. Either Barkinkhoev or Barakhoev Islam in a Priora with license plate number 310 drove up to us, asked how we were doing and said goodbye. There was a Mercedes spinning around at the time. Islam drove up to the checkout, made a circle without getting on the track, pulled up in my direction and parked 20-25 meters away from us. Literally in less than a minute, a Mercedes pulled up right next to me. They rolled down the window and started talking about something,” said Kotiyev.

The victim said that the published footage only shows a facial view of the entire picture. The verbal altercation was started by the Ossetians in the Mercedes, he added.

“The Armenian was getting ready to leave, and I immediately drove forward and parked next to Islam. The window was closed, but I knocked and he rolled down the window. As soon as I turned to him, something like, “Do you have any questions?” was shouted out to us from the Mercedes. They then pulled out and stopped the vehicle to my right. The video shows one opening the trunk, the other pulling a gun out of the car. A fight ensued,” he assured.

Earlier, CCTV footage from the scene of the conflict at a petrol station on the Kartsinskoye Highway appeared online. The shooting happened on November 10 in Vladikavkaz. Two Ingush were taken to hospital, and there were also Ossetian casualties.

The day before, Fortanga, citing the North Ossetian Interior Ministry, reported that the police had detained four instigators of the conflict. They were four local residents of the republic, aged between 21 and 30 years old. The seized traumatic weapons were sent for examination, the agency added. The criminal case is being investigated under Part 2 of Article 213 of the Criminal Code “Hooliganism”.

A friend of a resident of Prigorodny district, Akhmed Kotiyev, who was wounded during the shooting, said that at the hospital in Beslan they asked about his nationality and were rude to him, but the law enforcers did not react.

On November 4th the Interior Ministry of North Ossetia reported about a fight between Ossetians and Ingush in a village of Dachny in the Prigorodny district. The agency reported the arrest of the instigators of the conflict and the hospitalization of the injured teenager. Locals said there were two casualties, both Ingush, and the incident took place in an area of five-storey buildings populated predominantly by ethnic Ossetians.