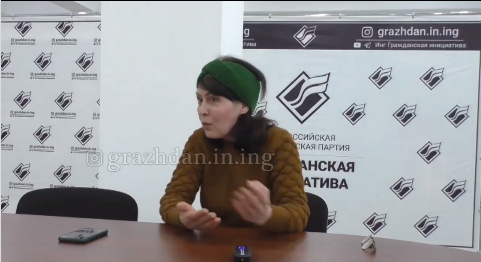 Against the backdrop of a high-profile scandal surrounding the perinatal center in Ingushetia, former patients and their relatives began to complain to the regional branch of the Civil Initiative political party about the medical facility.

“We are approached by dozens (dozens!) of former patients who have suffered from the negligence of […] staff,” reads a post on the party’s Instagram page.

It also published a video in which former obstetrician-gynecologist Lyubov Yevloyeva complained about the negligent attitude of the medical staff toward her daughter-in-law. Her son’s spouse was injured during childbirth on Dec. 13, 2021, which now causes the family to seek treatment in another city.
“She [daughter-in-law] called me every five minutes, ‘Mom, I feel worse. I could tell by her voice that the girl was really sick […] I barely got there, I went into the emergency room – not a soul was there. One sleeps there covered, the other sleeps here – you can see that she was lying down, her cheek is red. […] While they were holding me there, the doctors came out sleepy and started yelling at her: “Are you [why] calling her, calling her out? I came in, and she [daughter-in-law] was white as a sheet. The pressure is 175, and there is not a single soul,” said Lyubov Yevloyeva. According to her, the mother and child in her womb could have died if she had not been there.

“No one comes to me. They walk by, they look in […] One came, I asked for the medicine. In her bag I started looking for it. I said: “I’ll pay you, just take the pressure off” […] But if I hadn’t come, no one would have approached her. For half an hour she shouted: “Come here.” and no one ever came up,” Yevloyeva said.
According to the former nurse, after that the doctors started shouting at her and I started crying out of despair.

She said that on the second day after delivery her sister-in-law’s uterus was punctured during an examination and she was put on the operating table.

“Calls me […], says, ‘I’m about your sister-in-law. And so calmly she says to me: “I came in, I wanted to know the size of the uterus, I pierced it with a probe, I perforated it. My hair stands on end […] You give your healthy human being to this perinatal center and you don’t know whether they’ll carry him out feet first or not,” Yevloyeva said in bewilderment.

My daughter-in-law was discharged, but was not cured, she claims. A woman asks for help in finding a way to take her daughter-in-law to another city for treatment. Yevloyeva also intends to file a complaint with the prosecutor’s office, the Russian Ministry of Health, and Roszdravnadzor.

Earlier, it was reported that after Fortanga published a complaint by relatives of an injured woman at Ingushetia’s perinatal center, mass inspections by Roszdravnadzor, the republic’s government and the investigative committee began. Relatives of 35-year-old Madina Ausheva said that the mother of six children was admitted to the perinatal center on November 29, 2021, three hours later gave birth to a boy, and the next day she found herself in a coma from which she did not emerge for over a month.

In April 2021, after a complaint from patient Tamara Ekazheva, the prosecutor’s office found numerous violations in the republic’s perinatal center. The patient claimed that medical errors resulted in the amputation of her uterus and that she would never be able to become a mother again. As a result, the Ingushetia Prosecutor’s Office found confirmation of Ekazheva’s complaints, but the chief physician merely warned her to prevent similar cases in the future.

In 2018, Makka Khamuratova (Yevloyeva), a mother of six, fell into a coma during a cesarean section at Ingushetia’s perinatal center. The woman is currently paralyzed and does not speak.

Relatives of an Ingush woman who fell into a coma are demanding an investigation into...