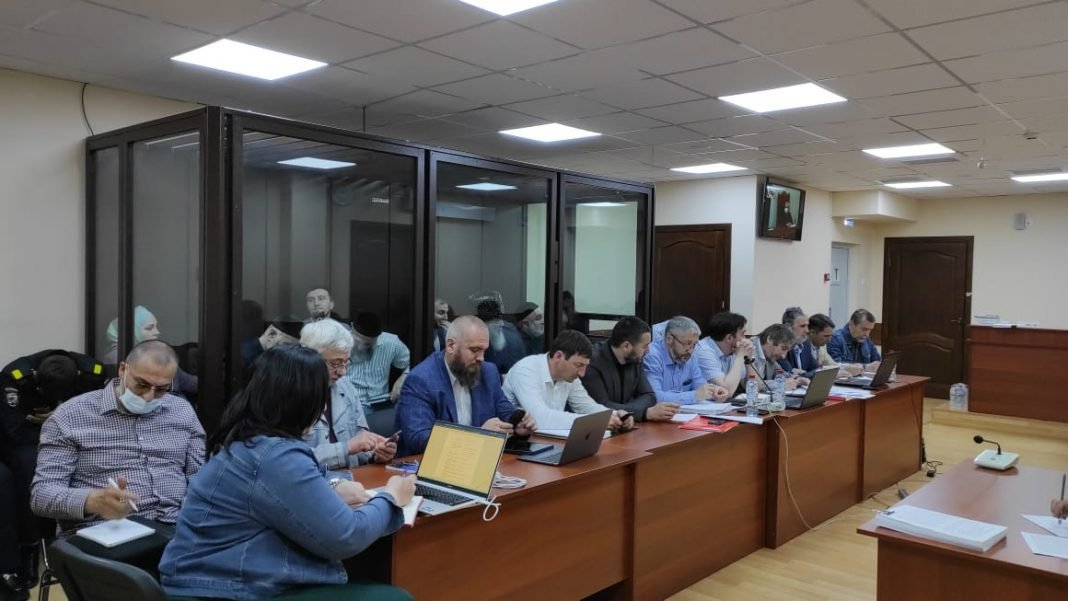 On 18 and 19 May, the Stavropolsky Regional Court considered an appeal against a change in the measure of restraint for the leaders of the Ingush protest. Also in Kislovodsk city court there was a regular meeting on the rally case, at which four victims were questioned. All four testified in favor of the defendants, attorneys told Fortanga.

Yesterday in the building of the Yessentuki city court two court sessions on the Ingush case were held. They were conducted by the Kislovodsk City Court and the Stavropol Territory Court. In the first half of the day the hearing of the next victims continued, and after that the participants of the process got into video communication with the Stavropol regional court about the appeal of the defense on the measure of restraint of the defendants. Further consideration of the appeal has been postponed to today, May 19.

The names of the injured Rosgvardians questioned in the court of first instance were classified. As noted by the lawyer
Bilan Dzugaev
However, after the defence pointed out this recurrent case, the judge limited himself to orally asking the victims whether they would agree to disclose their names, to which the victims objected, explaining this by fearing for their personal safety and the safety of their families.

During the questioning of the victims, it turned out that the Russian Guard officers were not aware what criminal case the court was considering, and also noted that they had not filed an application to be involved as victims. Asked by the lawyers whether violence was used against them at the 2019 rally in Magas, and whether they applied for medical help afterwards, the Rosgvardeys answered that during the dispersal of the rally various objects flew in their direction, but they did not suffer significant injuries and did not apply for medical help.

“To the question of the defense, whether the gathering had violated the law, they only answered that the rally was unsanctioned and therefore they had to be forced out. When asked if the gathering had done anything other than the fact of their presence in the square, they answered that they had not violated anything else and had not disturbed anyone. Moreover, someone said that he saw an elderly man in a hat, jacket and with a cane, and after that people began to disperse. Apparently this was about Akhmed Barakhoyev. They probably don’t know who he is, they didn’t know what they were saying [at the rally], everything was in Ingush, but still, someone called [the protesters in Ingush] and they dispersed. They couldn’t say anything in favor of accusing these particular people,” Orlov told Fortanga.

He pointed out that it was not the first time in the Ingush case that witnesses or victims spoke out in favour of the defendants and testified that the elders had prevented the clashes.

The Stavropol Territory Court also in the building of the Yessentuki City Court today considered an appeal to change the measure of restraint of the defendants on house arrest. At the beginning of the hearing, the lawyers filed a motion to listen to the prosecutor’s speech at the trial court of April 20, on which the decision was taken to extend the preventive measure. However, the prosecutor who took part in the current trial responded that there was no need to listen to his colleague’s speech as the prosecutor’s position has already been set out in the court ruling, the Chairperson of the Civic Assistance Committee* told Fortanga.
Svetlana Gannushkina
.

According to her, from the prosecutor’s side it looks like a statement that the court is representing the side of the state prosecution. “It was a very revealing reservation on the part of the prosecutor,” Gannushkina noted.

The position of the prosecutor’s office is as follows – no circumstances have changed that would allow changing the preventive measure, said the human rights activist.

However, the court has questioned almost all witnesses for the prosecution and a significant portion of the victims, so the arguments that the defendants could somehow influence them are untenable, especially since the victims are all classified, said Orlov.

“In addition, the circumstances changed, and in another court Zarifa Sautieva’s preventive measure was changed to house arrest and then cancelled. At the same time, at first she was not under the control of law enforcement agencies, she said: “if I wanted to, I could run away, but I have no such desire”, so it is proven that Sautieva did not take advantage of such an opportunity – this is also an argument that both she and others did not intend to hide”, – noted Orlov.

He also said that the regional court was presented materials on the administrative responsibility of some defendants, in particular for participation in the rallies. “But strangely enough there is no continuation in these materials – in these administrative cases our defendants were acquitted and the charges were dropped,” said the human rights activist.

“The arrest of the defendants has nothing to do with the law.”

Orlov believes that there are no legal grounds to keep in custody his client Zarifa Sautieva and other defendants.

“That’s what I said at the trial and I’ll say it again – under the law there is no reason to keep Sautieva and others in custody. But there are other reasons for keeping them in custody, but it has nothing to do with the law – it is pressure on them by placing them in torture conditions, in fact, and an attempt to intimidate society to show how they will deal with anyone who allows themselves to publicly come out with an opinion that condemns the position of the authorities”, – said Orlov.

As a result, the Stavropol Regional Court found the prosecution’s arguments about the gravity of the crime and fears that the defendants could flee or put pressure on victims and witnesses if placed under house arrest to be justified, the lawyer told Fortanga
Aralbek Dumanishev
.

The defence intends to file an appeal against the ruling of the regional court, the lawyer said
Andrei Plotnikov
.

A regular session of the Kislovodsk city court was postponed until May 25.

Rallies against the border agreement between Ingushetia and Chechnya, which had been held in Magas since the fall of 2018, turned into clashes with security forces and detentions of activists in March 2019. A total of 46 people were arrested and about 30 people received real sentences on charges of violence against government officials. Seven leaders of the Ingush protest are in the dock. They are accused of organizing and calling for violence against representatives of the authorities and of establishing and participating in an extremist community. The arrest of the protest leaders was extended until 9 August.

* The organization was included in the list of foreign agents by decision of the Russian Ministry of Justice.