A resident of Moscow applied to the CEC, the Investigative Committee and the General Prosecutor’s Office with a request to check information about a fake diploma of United Russia State Duma candidate Bekkhan Barakhoyev.

Reports of a forged diploma of a State Duma candidate appeared in the Ingush segment of the social networks. According to publications, the candidate received his diploma from Chechen State University in 1994, although there was no university of that name at the time.

The Muscovite appealed to the supervisory authorities on September 7 and 8. “As you know, the Federal Service for Supervision of Education and the Moscow printing house “Goznak” have information about which university and in which year the corresponding form of a diploma on higher education was sent for issuance. The actions of Barakhoyev B.A. are seen as indications of a crime provided for by Article 327 of the Criminal Code of the Russian Federation (document forgery – ed.)”, – reads the statement.

Mostovoy, speaking to Fortanga, said he had nothing to do with politics, but was “unhappy that candidates with forged documents might be allowed to participate in the elections.”

“According to the information from open sources I became aware of possibly invalid diplomas of higher education of candidates for deputies. When discussing this phenomenon on the Internet by its users, it is clear that it happens in practice. In order to prevent such category of persons from coming to power, I applied to the state authorities with a request to check more thoroughly the documents of the citizens registered as candidates for deputy,” the applicant explained.

Mostovoy also noted that he had not yet received a response to his application. 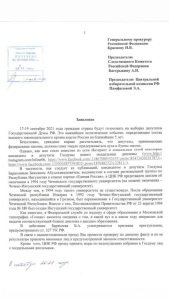 Experts: Election Commission has found a formal reason not to allow Ayup Gagiyev to run...