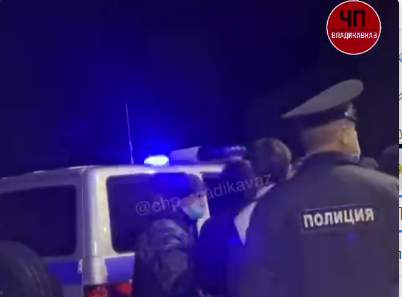 Two Ingush are hospitalized after a shooting at a gas station near the village of Kartsa in Prigorodny district of North Ossetia, and there are Ossetian casualties, sources said. According to the police, one person was taken to hospital as a result of the conflict. Law enforcers claim that the conflict occurred on domestic grounds.

The shooting happened on the evening of Nov. 10 near Kartsina Highway. There were casualties both on the Ingush and Ossetian side, a source familiar with the situation told Fortanga.

According to the source, the conflict was provoked by Ossetians who were in a state of alcoholic intoxication. “The verbal altercation escalated into a fight and riot police had to open fire in the air to break up the brawlers,” he said.

An exchange of fire ensued, as a result of which two Ingush were wounded with traumatic weapons and taken to hospitals in Oktyabrsky and Beslan in a moderate state of health, an informed source told Fortanga.

According to him, one of the victims is Jamalei Tangiyev, a native of the village of Chermen (Mochkoyurt), while the other is Akhmed Kotiyev. It is reported that there are also wounded from the Ossetian side, but no information about their state of health is available.

One of the injured Ingush was subsequently transferred from a hospital in North Ossetia to the Ingush Republican Hospital, the source said.

He also said that two Ingush people were detained on the evening of November 10, and that they were released this morning.

Eyewitnesses said that they started shooting at the Ingush people for no apparent reason, according to a post on the inline06 Instagram subpublic. “The Ossetian who opened fire had previously had provocative antics, the last time he was called to go one-on-one, he fled and called the police. According to the source, he has some kind of connection with the staff. But today (November 10) he decided to shoot quickly and get away. Apparently, he failed,” the post says.

As a result of a scuffle and shooting between groups of young people near the village of Kartsa in Prigorodny district one person was injured and taken to hospital, the Interior Ministry of North Ossetia reported today.

“Around 8.30 p.m. Moscow time a call was received by the duty officer on duty in Vladikavkaz. The caller reported a conflict between several young people on the Kartsinskoe highway near one of the gas stations. According to preliminary information, one of the participants used a traumatic weapon. Rosgvardia and Interior Ministry forces were immediately dispatched to the scene of the incident, and they prevented the conflict from developing further,” – said the caller. NewsTrackerquoted a North Ossetian Interior Ministry official as saying.

At the same time, the law enforcement officer assured that “the conflict arose on domestic grounds, not national. Ingushetia’s Interior Ministry also denied rumors of an interethnic conflict on the Kartsinskoye Highway, the newspaper reported.

To remind, on November 3 in the yard of a multi-storey building in Dachny, Prigorodny district, a conflict occurred between a group of adult Ossetians and Ingush teenagers, as a result of which two teenagers aged 15-17 were beaten and taken to hospital with injuries. At the same time there were police officers near the place, who saw everything, but did not interfere with what was happening, witnesses said. The North Ossetian Interior Ministry and the Ingush Ministry of Internal Affairs gave assurances that the clashes were motivated by domestic violence, while witnesses to the incident insist that the brawls were motivated by ethnic hatred.

Commenting on the incident with the beating of teenagers in Dachny, Ingush public activists said that only joint patrols of Ingush and Ossetian law enforcers in Prigorodny district could prevent interethnic conflicts.