Новости Ингушетии Фортанга орг
Home News The authorities ignore the report of the National Commission on the Boundaries...

On August 5, the Council of the Teips of Ingushetia sent a 94-page report and a resolution to the state authorities. An appeal demanding that “appropriate measures be taken to restore the territorial integrity of the republic” was sent to federal and local authorities and, in particular, to the heads of Ingushetia and Chechnya.

“Of course we hoped there would be a reaction,” he noted. – First of all, from the leadership of Ingushetia, because it should be interested in restoring the territorial integrity of the republic and making the voters feel the feedback. So far there has been no reaction from any of the structures. The first to react was not Kadyrov, but Kalimatov – the head of Ingushetia, whose interests were infringed and whose residents’ rights were to be restored. He should have made it clear that what was stated in the report was true, and held talks with the federal authorities, the presidential plenipotentiary in the North Caucasus and so on.

Goygov believes that ignoring the problem of changing the border between Ingushetia and Chechnya is due to a direct order from the federal centre. “I think the Kremlin has a directive and that’s why officials are afraid to turn their faces to the problem,” he believes.

Recall that the All-National Commission to consider issues related to the definition of territories and boundaries of Ingushetia was formed at the World Congress of the Ingush people on October 30, 2018. The 900-page report, with 75 maps attached, is the result of 30 different experts proving the inappropriateness of the boundary set by the 2018 Agreement.

An abridged version of the report was sent to federal and local authorities on 5 August. Its summary includes a paragraph on the need to establish a joint commission with Chechen historians and social activists.

“The commission needs to revisit this issue with a new composition, which will include representatives of Chechnya. Either our opponents, as well as federal and local authorities, should analyze the report and say that everything written in it does not correspond to reality, the maps presented do not exist and everything is a figment of fantasy. Let them declare it. But if what is written there really has historical, legal basis, we must deal with it. And this is one of the tasks of the state,” said Goygov.

According to him, the report can’t be thoroughly studied in one month, but “the authorities should have been at least informed that such a document was received and that the proceedings were underway.

Also at the July meeting of the Teip Council, the conclusion of the Alim Council was announced and approved “on the non-compliance with the norms of Islam and Shariah of the actions of the persons who signed on behalf of the Republic of Ingushetia the agreement on the establishment of the border with the Chechen Republic of September 26, 2018, and who supported this agreement.” The clergy unanimously acknowledged that these actions were contrary to the norms of Islam, and Muslims should not be guided by this decision.

“The Qadiyat (Arabic name for the Sharia court) met on the issue of the Accord several times – in 2019, when it heard from members of the People’s Assembly, in November 2020 and in April 2021. Clergy representatives also attended the presentation of the report on July 7, where they announced their decision. In fact, the National Commission itself includes nine representatives of the Ingush clergy. The Shariah proceedings concluded that the actions of [the former] head of Ingushetia as head of the entity infringed on the interests of the people and led to great contradictions within society,” Goygov said.

According to Askhab Goigov, representatives of the clergy analyzed the consequences of the agreement for Ingush society. “The immediate results of the head’s actions – the shrinking of the republic’s territory, the deteriorating socio-political situation, the growing disagreement between the authorities, the bulk of the population and the clergy – allowed them to recognize them as inconsistent with Shariah norms,” the public figure explained.

Recall that in the fall of 2018, the heads of Ingushetia and Chechnya, Yunus-Bek Evkurov and Ramzan Kadyrov, concluded an agreement on the establishment of borders between Ingushetia and Chechnya, under which a significant part of the territory was transferred to Chechnya. The agreement sparked mass protests, resulting in clashes with security forces and detentions of activists. A total of 46 people were arrested, most of them receiving real sentences on charges of violence against authorities. Eight leaders of protest leadersare currently in the dock, including former Ingush Interior Minister Akhmed Pogorov, who is being tried separately. 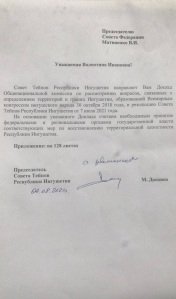 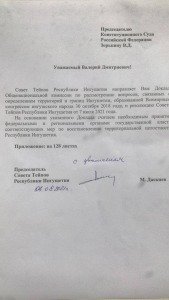 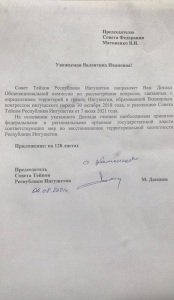 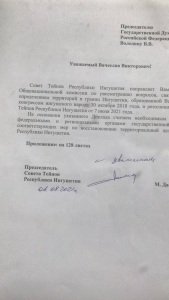 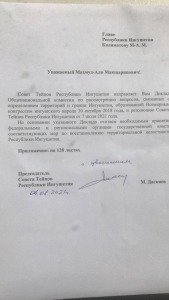 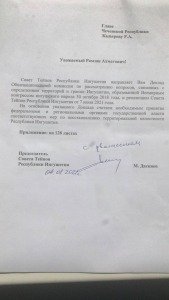 Former workers of the state farm in Ekazhevo have asked the authorities to allocate the...