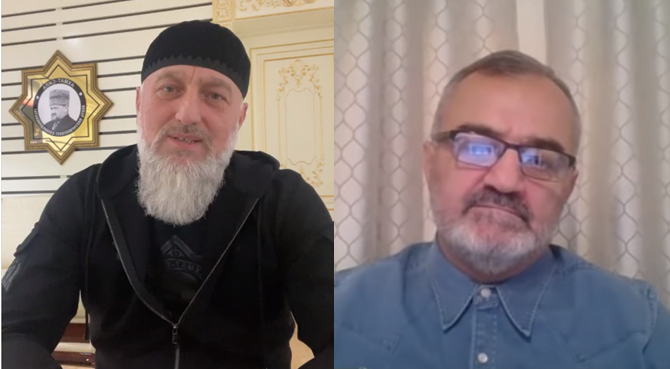 Chechen State Duma deputy Adam Delimkhanov announced a blood vengeance against the president of the European Ingush Association, Ibragim Lyanov, for political reasons, whereas according to Vainakh tradition it is declared for the murder of a relative, experts interviewedby Caucasian Knot reported.

On November 18, the Chechen trail YouTube channel published a video in the Chechen language entitled “Appeal of Adam Delimkhanov to the Teip Council of Ingushetia. In it Delimkhanov spent almost 30 minutes talking about what caused the diversion of the river Fortanga, and also ventures to verbally insult the Teyp Council. Delimkhanov called the members of the Teip Council in Ingushetia the “Council of the bunch”, “instigators”, “enemies of the people” and even “shaitans” – this is how the Chechen leadership and law enforcement agencies usually refer to the militants.

“We are ready to sign every word of our leader. Whoever crosses the contractual border, we will not only make a flag out of his pants, we will do other things to him that people won’t recognize, but we will let you know about it,” Delimkhanov said.

The next day, on November 19, a video with the response of the president of the European Ingush Association, Ibragim Lyanov, appeared on the YouTube channel New Rush Word. Lyanov says that Duma deputy Adam Delimkhanov declared blood vengeance on him, and notes that he cannot be intimidated in this way.

Delimkhanov’s words may indeed be interpreted as a declaration of blood vengeance, though not in keeping with Vainakh traditions, says Timur Akiyev, head of the Ingush branch of the Memorial Human Rights Centre*.

“The very expression ‘blood feud’ implies that it is revenge for blood – for murder or wounding, as it was originally prescribed in the Vainakh adats. In principle, revenge may also be exacted for an insult, but in any event revenge is declared officially through a respected intermediary to the relatives of the murderer or offender. But if this expression is interpreted more broadly, outside the framework of Vainakh etiquette, as simply a threat of murder or physical violence, then one might interpret Delimkhanov’s threat as ‘blood feud’,” he said.

A representative of the Ingush national-cultural society Daimokh (Fatherland) Albert Darbazanov also pointed out that blood vengeance is declared in response to a murder.

“Blood feuds are not declared like that. It is declared when a person kills another person as a result of a quarrel. For example, or because of some selfish reasons. In this case blood feud is declared for him. And this can be called in another way. It’s a declaration, a promise of retaliation for the insult, the reputational damage,” he said.

Albert Darbazanov does not rule out that the Ingush of Europe may now face danger.

“For the Ingush living in Europe, including Ibrahim Lyanov, this is a threat and a danger. Supporters of the Chechen authorities in Europe have already shown themselves by assassinating their critics. So attempts on the part of the Ingush diaspora are possible,” he said.

It should be reminded that after the failure of the meeting on the banks of the Fortanga all Chechen power units were moved to the borders of the republic, the length of which is 841 kilometres. The three-day exercise demonstrates Chechnya’s readiness for war against the background of the unstable situation in the world, Ramzan Kadyrov pointed out. However, the Chechen state television channel Grozny, which is the mouthpiece of the Chechen authorities, devoted most of its report on this subject to the deployment of security forces on the border with Ingushetia, and Aslan Israkhanov, Chechen Deputy Interior Minister, said on the air of the channel that this was about “the security of the republic.

Earlier, Chechen Parliament Speaker Magomed Daudov reproached the Teip Council of Ingushetia for the failure of the elders to appear at the Sharia court on the land issue. He also threatened to take back what he thought were Chechen lands by looking at what Russian law says. Before that the head of Chechnya Ramzan Kadyrov announced at a field meeting in the Galanchozhsky district that he would take away Chechen lands given by Dzhokhar Dudayev from neighbouring Ingushetia if the Ingush would not calm down. According to him, the agreement to establish the border between Ingushetia and Chechnya in 2018 is a fraternal favour.

Against the backdrop of escalating disputes over the border with Ingushetia, Kadyrov announced that he was conducting drills and cordoned off the borders of Chechnya.

** the organization has been entered by the Russian Ministry of Justice into the register of non-profit organizations performing the functions of a foreign agent.

Chechnya conducts exercises amid worsening disputes over the border with Ingushetia